I still carry with me the passion IRB Barcelona sparked, says 2017 Alumnus of Excellence Marc Liesa

Marc Liesa recommends that young scientists make career decisions based solely on what truly inspires and motivates them.
19 Jul 2017

The 2017 IRB Barcelona Alumni of Excellence Award has gone to Marc Liesa, who obtained his PhD in 2008 in Antonio Zorzano’s Complex Metabolic Diseases and Mitochondria Laboratory. The award, established in 2016, acknowledges the excellence of former IRB Barcelona scientists and is given with the support of Eppendorf. Liesa visited the Institute on 5 May to receive the distinction. He talks about his science and shares some secrets of his success.

Mitochondrial biology has always been close to Marc Liesa’s heart. His scientific career has been dedicated to studying these eukaryotic organelles, which provide energy to cells. After working with Antonio Zorzano as a PhD student at IRB Barcelona from 2003 to 2008, he moved to Boston University Medical Center. After 4 years there as a postdoctoral fellow, he stayed on as an instructor and then as Assistant Professor. In 2015, he was appointed Assistant Professor-in-Residence at the David Geffen School of Medicine at UCLA, where he leads his own research group.

Currently, Liesa’s research addresses the functional alterations that mitochondria undergo during a pathological condition, such as obesity or type II diabetes. He is interested in whether these changes associated with the disease are an adaptation or compensation that alleviates the most deleterious effects of the condition. “Understanding these processes is essential if we want to design therapies targeting the mitochondria to cure these diseases,” he says. Indeed, preventing the functional alteration of mitochondria might prove counterproductive if the change is an adaptive compensation rather than a change contributing to the disease, he explains.

In particular, Liesa and his team at UCLA are focussing on ABCB10, a transporter that plays an important role in the handling of intramitochondrial heme. Mitochondria synthesise heme, a molecule found in red blood cells that is responsible for transporting oxygen. But heme can also be toxic, causing what is known as oxidative stress. “We have demonstrated that ABCB10 is not essential for heme synthesis per se but rather that it is important for protecting mitochondria against the toxic effects and the oxidative stress that heme might cause,” explains Liesa. They are now addressing other functions of ABCB10 and suspect that it might be involved in glucose intolerance and type II diabetes.

Liesa admits that his passion was sparked at IRB Barcelona. “Even now, as a young PI, I still carry that excitement with me,” he says. He believes that to be a good group leader, he needs “to make sure that the next generation of scientists have a better training and formation than the previous one. Otherwise science can’t advance.” Aware that “ninety per cent of what you do is either not going to work or it’s going to be rejected,” he goes on to say, “you have to learn to deal with frustration and not make it personal. The less time you spend complaining, the more successful you will be.” Liesa’s advice for researchers at the beginning of their careers is to “always focus on the positive. It’s the only way to move forward when things go wrong. After all, as they say, if you have a problem and there is a solution, you’ll find it. If there’s no solution, you don’t need to worry about it.”

He adopts that attitude himself when facing challenges. “The USA is a very competitive environment,” he says. And with the new government, “people feel funding for science is a bit more insecure, and so there’s even more pressure.” But he is not too worried, and recites a Catalan proverb, “qui no arrisca, no pisca” – “Nothing ventured, nothing gained.”

Based on his own experiences, Liesa recommends that young scientists make career decisions based solely on what truly inspires and motivates them. “Otherwise you won’t enjoy it,” he warns.

Although he enjoys living in the USA, Liesa is open to the possibility of one day returning to his native Catalonia, where his family lives. “I would like to help my country to boost its research.” However, he thinks that three conditions must be met for a scientist to return to their country. “Firstly, resources. A good start-up package and continued support are very important. Secondly, freedom to do research that can have an impact, even if it’s not trendy. Finally, the possibility to establish collaborations with industry. All academic scientists can benefit from learning how translational science in industry is done.”

In the meantime, the spirit of IRB Barcelona stays with him. “IRB Barcelona taught me the importance of collaboration among people with diverse backgrounds. I feel this is one key for a successful research institute.” 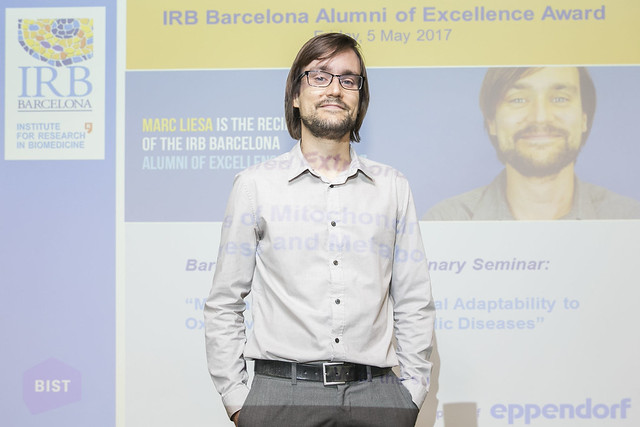