Amyloid-&beta; and Alzheimer's Disease: From Fundamental Principles to Therapeutic Strategies 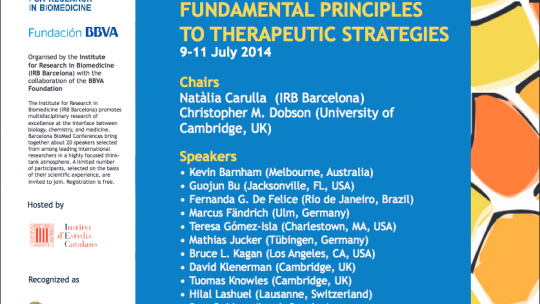 Alzheimer’s disease (AD) is a progressive neurodegenerative disorder whose onset robs us of key capacities that define us as humans, including memory, language, emotional control and the ability to reason and make rational decisions. Currently, there are more than 35 million people worldwide suffering from this disease and there is no cure. As aging is one of the major risk factors for AD and we are living longer, the number of people affected is expected to grow dramatically and progressively in coming decades. Indeed, AD is rapidly becoming one of the greatest challenges to health care systems and social stability in many parts of the modern world.

One of the hallmarks of AD is the progressive aggregation of the amyloid-beta peptide (Aβ) in the brain and the resulting formation of the characteristic amyloid plaques. In this meeting, we will discuss the role of Aβ aggregation in AD. In particular, we will address current progress in understanding the mechanisms by which a variety of Aβ aggregates, ranging from soluble oligomeric species to insoluble amyloid fibril assemblies, form both in vitro and in vivo. Within this framework, we shall explore the specific features of Aβ aggregates that are responsible for neuronal damage. In addition, we will appraise strategies for the development of biomarkers and imaging techniques and discuss the molecular principles underlying the production and degradation of Aβ and the transport and spread of these aggregates from cell to cell. The meeting will also focus on various approaches being adopted to develop effective therapeutic agents and on the successes and failures of recent attempts to achieve such vital objectives.

This BioMed conference will gather scientists working in a wide range of disciplines, including chemistry, biochemistry, biophysics, biology and genetics and those in clinical practice and in companies. Indeed, this conference will provide an opportunity for those devoted to basic research to interact with colleagues involved in the development and testing of potential drugs, allowing them to discuss current ideas and major unresolved issues and to explore future avenues. In summary, this event seeks to stimulate new approaches to studying AD and to developing effective means for its prevention and treatment.

Organized in colaboration with:

Press Conference: The scientific community does not give up its fight against Alzheimer's disease

There is no registration fee for this conference, but the number of participants is limited.

Participants are invited to submit abstracts, a number of which will be selected for short talk and poster presentations. Abstracts should include a title, authors, affiliations, summary (max 250 words) and references.

The BARCELONA BIOMED CONFERENCE on Amyloid-β and Alzheimer’s Disease: From Fundamental Principles to Therapeutic Strategies will be hosted by the Institut d'Estudis Catalans (IEC) in the heart of downtown Barcelona. Talks will take place in the Sala Prat de Riba.

How to reach the IEC:

Via Taxi
A taxi from the airport to the IEC should take about 25 minutes and cost around 25-30 euros depending on traffic and luggage.

Via Train
The RENFE train leaves the airport every half an hour and will take you to Passeig de Gracia station, in about 25 mins and costs 2.80 Euros for a single ticket. Change here for the Green Line metro to Liceu. The IEC is a 10-minute walk from the metro station (see map).

Via Bus
A transfer service called "Aerobus" will also take you from the airport to Plaça Catalunya and costs 4.25 Euros. The journey time is around 30 minutes. The IEC is a 10-minute walk from the Plaça Catalunya (see map).

The "Barcelona bus" runs a transfer service between Girona Airport and Barcelona's city centre, scheduled to coincide with Ryan Air flights. The bus stops right outside the airport and will take you to Estacio d'Autobusos Barcelona Nord (Barcelona's main bus terminal), with a journey time of about 1 hr 10 min. The nearest Metro stop to the bus station is Arc De Triomf, which is a 5-10 minute walk from the bus station (exit the bus station Sortida Nàpols). Take the Red Line (L1) to Plaça Catalunya. The IEC is a 10-minute walk from the Plaça Catalunya (see map).

Transfer to the metro Red Line (L1), and get off at laça Catalunya. The IEC is a 10-minute walk from the Plaça Catalunya (see map).

If you are arriving locally:

Other hotels
A list of additional hotels within walking distance of the IEC can be found at: http://www.barcelona-tourist-guide.com/en/hotels/hotelmaps/ramblas-hotel-barcelona.html (The IEC is located near the blue point 08/5 star). Rates will vary depending on choice of hotel and season. Please check with the hotel of your choice directly for the best offer.

Residences
Another possibility is the Residencia dels Investigadors (Investigators Residence Hall), which has an agreement with the CSIC (Spanish National Research Council) and the Catalan Government. It is located just behind the IEC, and is available for short-term stays. Rates range between 70 euros for a single room, to 99 euros for a double room.

Participants registered for events in the Barcelona BioMed series should contact the hotels and residences directly to arrange bookings and payment.