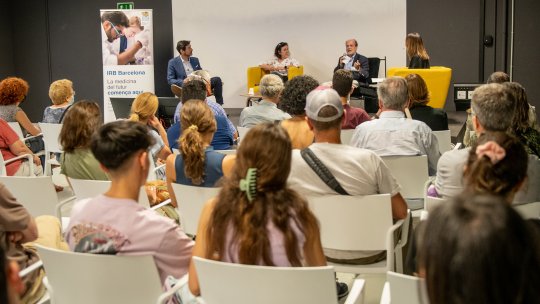 Title: "Aberrant phase separation is a widespread killing mechanism of bioactive peptides in health and disease"

Cationic repeat peptides are increasingly implicated in the pathophysiology of age-related neurodegenerative disease. These peptides are highly toxic in all tested disease models, and seem to perturb an ever-expanding list of cellular pathways. This observation begs the question whether this target promiscuity is (1) relevant to disease and (2) how it is encoded in such simple sequences. A first clue came from the observation that these cationic repeat peptides have the tendency to drive protein condensation. Given their charge, these peptides are exquisitely sensitive to the presence of nucleic acids. By studying their target space as a function of RNA concentration using mass spec, we uncover a hidden hierarchy in their target preference that relates to subcellular differences in RNA abundance.

To test whether these insights from disease translate to biology, we used this framework to develop a machine learning algorithm that allowed us to predict protein behavior form sequence. Compellingly, we uncover that bioactive peptides such as antimicrobial peptides produced by our own cells, but also venom peptides derived from spiders, scorpions and rattle snakes, phenocopy the molecular behavior of these disease-related cationic peptides. In all, we find that such peptides exert toxicity by upsetting the electrostatic balance of a cell, hitting myriad pathways at once. We name this process polycation poisoning and find that it has independently evolved again and again across the entire tree of life as a killing strategy of bioactive peptides. Based on these findings we are now exploring toxin-antitoxin systems as innovative therapeutic strategies to protect neurons against cationic repeat peptide toxicity.