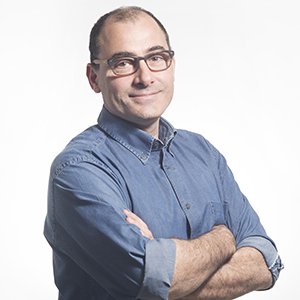 B. Sc. in Biology from the University of Barcelona (1988), and Ph.D. in Biochemistry from the University of Edinburgh. After the completion of his doctoral studies he was hired as a postdoctoral scientist at the Department of Biology of the Massachusetts Institute of Technology (1993-97). From Cambridge, he moved to San Diego, where he accepted a Senior Research Scientist position and, in 2001, an Assistant Professorship of Molecular Biology at the Scripps Research Institute. In June 2003 he accepted an ICREA Research Professorship, and became a principal investigator at the Institute for Research in Biomedicine (IRB Barcelona).
La Caixa/British Council fellowship (1989-91). Fellow of the Faculty of Medicine of the University of Edinburgh (1992-93). Postdoctoral Scientist, Dept. of Biology, MIT 1993-1997. Postdoctoral fellow of the Generalitat de Catalunya (1995-96). Senior Research Scientist, TSRI (1997-2001). Assistant Professor of Molecular Biology, TSRI (2001-03). ICREA Research professor (2003). In addition, Dr. Ribas has co-founded two biotech companies: Agrobiosys Ltd. and Omnia Molecular Ltd. Omnia is a recent start-up that plans on taking drug-screening technology being developed in the Ribas laboratory to an industrial setting.
His research is focused on the mechanisms of control of protein synthesis, or gene translation. The transformation of genetic information into protein sequence is the central process of biology, its control is essential for the well-being of the cell and a large number of human diseases are caused by defects in this control.
Our laboratory is currently focused on the mechanisms that integrate mitochondrial protein synthesis with the rest of the cell metabolism, and on the role of a specific family of nucleotide-modifying enzymes in the control of certain genetic programs.
We strive to integrate evolution, mechanistic biology, and biotechnology in all our projects.