Manuel Serrano: “The best thing about the IRB Barcelona PhD Symposium is the students’ enthusiasm”

Manuel Serrano from CNIO was one of the ten invited speakers who participated in the IRB Barcelona PhD Symposium on 12-13 November. The event attracted many young and senior scientists from all over Europe and covered a wide range of themes. The next event of the series will take place in 2017.

The fourth edition of the IRB Barcelona PhD Symposium, “Science Fights Back”, took place on 12-13 November and saw the participation of around 160 people and 10 invited speakers from all over Europe. Cell stress, ageing and senescence, homeostasis, photopharmacology, chromosegregation, and small molecule stabilisation were among the topics covered during this 2-day event organised entirely by 14 PhD students at the Institute. The sessions were held in downtown Barcelona, at the Col·legi d’Arquitectes, right in front of the Cathedral, which you could make out from the venue’s cafeteria.

Many participants expressed their excitement about a Symposium that, once again, proved to be not only interesting to organise but also scientifically enriching.

Manuel Serrano, from CNIO, an invited speakers who gave a talk on ‘Novel approaches to ageing: senescence and reprogramming,’ was energised by the Symposium. “I’m leaving with the feeling that at my institute we have to get inspired by your young scientists,” he says. “The best thing about the Symposium has been their enthusiasm. They were very active: with the poster session, asking insightful questions, with the organisation in general. I am very grateful for everything they did”.

Serrano highlighted the multidisciplinary nature of the Symposium. “The talks covered many topics, and the speakers had different levels of seniority, came from different countries, and were experts in different fields. This diversity is very good for science, and it shows that the speakers were selected with care, and not just because ‘The boss said so’,” he adds.

Serrano’s presentation was one of those most enjoyed by the students. “My take-home message is that cells inside our organisms have more plasticity and ability to change than we used to think,” he explains. “They are not determined in an irreversible way, and we can change them. We still have to learn how, we know very little about how the natural repair process in tissues works. One of the components of this process is certainly senescence, because the alarm signal that gets to the tissue in this case is ‘there’s damage, we need to repair it’. But we are still trying to figure out the details.”

During his presentation, Serrano mentioned the induced pluripotent stem cells (iPS) discovered by Nobel Laureate Shinya Yamanaka. “We believe this process also takes place in vivo, in a limited manner. But it is still unclear how.”

Both iPS and CRISPR/Cas9, the bacteria immune system that scientists have learnt to use as an efficient genome engineering and editing tool, “will undoubtedly open a lot of opportunities in the biomedical field,” he believes. “Yamanaka already won the Nobel prize. Doudna and Charpentier, the scientists who discovered CRISPR, will likely soon get one too. We need to learn how to engineer cells, and today this capacity is still very limited. One of the main challenges for regenerative medicine is being able to transplant engineered cells in vivo.” 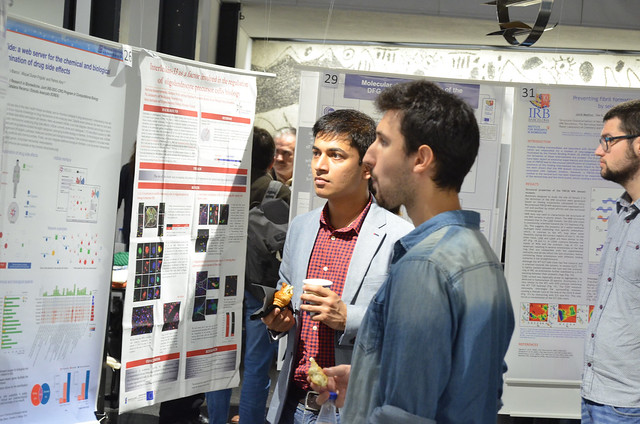 Why does skin age?

Ok diario and Noticiero Universal have published an article about the research led by IRB Barcelona and CNAG-CRG that confirms that the loss of cellular identity is one of the causes of aging. The paper reports that that, during aging, fibroblasts acquire many characteristics of adipocytes.

Cope, ABC, La Rioja, among other media, have published an article about the inscriptions to the IV Women's Race for Research from Asociación Española Contra el Cáncer (AECC). The resources obtained from this race will be used to finance two predoctoral grants at two institutions in La Rioja. Also, the project "Research on the impact of senescence influenced by inflammation as a therapy on cancer stem cells" led by Marta Kovatcheva, researcher at IRB Barcelona, will be financed.

The beauty conquest without limits

Quo magazine has published a report on the aesthetic treatments that people use to stay young. They mention, for example, Botox, red light masks, breast prostheses, among others. In the article, they include the statements of experts in the field of health and research and also mention the study performed by IRB Barcelona and CNAG-CRG on the aging of the skin caused by the loss of identity and function of the main cells of the dermis.