A drug against AIDS could be effective against the herpesvirus 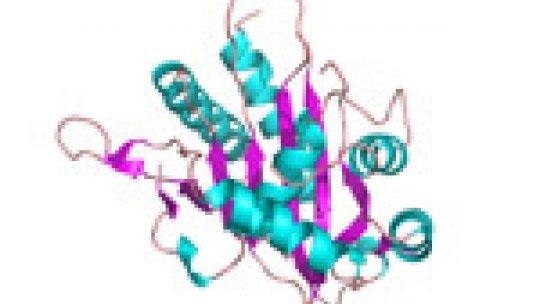 Structure of the UL89 protein, which could be a valid target against all Herpesviridae (c) Lab Miquel Coll.

Researchers at IRB Barcelona have discovered this with the human cytomegalovirus, the most deadly and widespread herpesvirus and the cause of serious defects in neonates.

Scientists at the Institute for Research in Biomedicine (IRB Barcelona) headed by the coordinator of the Structural and Computational Biology Programme, Miquel Coll, have published a new study that demonstrates that raltegravir, the drug approved in 2007 for the treatment of AIDS that is sold by Merck under the name Isentress, cancels the function of an essential protein for the replication of one kind of herpes virus. This study, published in the journal Proceedings of the National Academies of Sciences (PNAS), is the first step towards the development of a drug against the entire herpesvirus family.

“These results have a clear medical impact for three reasons”, explains Miquel Coll, also a CSIC research professor. “First, humans do not have the viral protein that is affected, thus this would allow a highly specific drug that does not show the secondary effects that other drugs may have. Second, the inhibitor is not toxic for humans when administered at therapeutic concentrations because it is already on the market and thus toxicity tests are facilitated; and third, we have data that indicate that all herpes viruses have this protein. Therefore, it could be a valid target against all Herpesviridae.”

The drug cancels the function of an essential protein for the replication of the virus.

Herpesviruses include pathogens such as herpes simplex 1 and 2, the virus that causes chickenpox otherwise known as zoster virus, the Epstein-Barr virus –associated with several types of cancer -, the roseola virus, the cytomegalovirus and the herpes virus associated with Kaposi sarcoma –in AIDS patients -. The human cytomegalovirus (HCMV), on which the study was performed, causes neurological defects in 1% of neonates in developed countries. It also produces retinitis that deteriorates into blindness in 25% of subjects with AIDS, defects in the brains and central nervous systems of young adults, inflammation of the colon –also in those with AIDS -, mononucleosis and serious diseases of the throat. Although 90% of adults carry HCMV, this virus is opportunistic, acting in people with weakened immune systems such as in cancer and AIDS patients, recipients of organ transplants and neonates.

The protein UL89 could be a valid target against all Herpesviridae

To replicate, the herpes virus enters the nucleus of a cell where it uses the cell machinery to copy its DNA several times into a single large chain. Once this copy has been made, acts a complex called terminase, formed by three protein subunits. The terminase cuts the new DNA into small fragments, the size of a single viral genome, and introduces these into empty shells (capsids) that have developed in the cell nucleus. Then, the new viruses leave the cell to continue infection. The researchers resolved the 3D structure of one part of the terminase and when they observed that it resembled the integrase of the AIDS virus, for which drugs are available, they tested it against the herpes virus protein. Thus they discovered that raltegravir acts on the subunit UL89 of the terminase and cancels the scissor function, which is required for viral replication.

The assays were performed directly on the protein in test tubes. “Now we must do the assays on whole infected cells, improve the effect of the drug and validate that it is also effective for other kinds of herpes viruses”, explains Miquel Coll, whose lab has patented this second application for raltegravir. To resolve the 3D structure of the target protein, the scientists have used a state-of-the-art high-performance protein expression technique, with the collaboration with Darren Hart’s group at EMBL in Grenoble, where 18,000 clones or different fragments of the protein have been tested. They have also used the Grenoble synchrotron to obtain the structural data. The study has lasted five years and forms part of the European project SPINE-2 complexes.