A study reveals how respiratory tubes and capillaries form

Scientists at the Institute for Research in Biomedicine (IRB Barcelona) and CSIC report on the formation of the small-diameter respiratory tubes of the fly Drosophila, a process that resembles the development of the finest blood vessels, the capillaries, in mammals.

These tubes or capillaries, formed by a single cell, connect the main tubes of the respiratory system with organs and tissues, thereby providing oxygen. The study has been published in the journal Current Biology, part of the Cell group.

Jordi Casanova, professor at CSIC who heads a developmental biology group at IRB Barcelona, addresses the gene expression that leads to the formation of different parts of an organism. Revealing how respiratory tubes develop in Drosophila is relevant because the genes and mechanisms involved are very similar to those present in the mammalian respiratory and circulatory systems. “Our study explains the formation of the smallest tubes that develop to transport nutrients and oxygen to tissues”, says Casanova.

Capillary formation is tightly linked to the development of tumours since these have the capacity to generate new capillaries to obtain more nutrients, in a process known as angiogenesis. Indeed, one of the strategies under study to prevent tumour growth is to inhibit the formation of these supply routes.

The tubes measure only a few microns in diameter (one micron equals one thousandth of a millimetre) and are formed inside a cell. The lengthening of a cell and the development of a tube occur simultaneously. “If a tissue or organ requires oxygen, it sends a signal to cells in the main tube. At that point, a single cell begins to lengthen towards its target, while the tube is developing inside. It is like putting a finger into a wrinkled glove: the material stretches as the finger slides in”.

In order to follow the process in vivo, the researchers have filmed the development of embryos under a microscope. “Real time observation of embryo development has allowed us to see what happens in the entire organism and to understand the interaction with neighbouring tissue. After, using molecular biology techniques, we have identified the components that participate”, explains the first author of the study, Louis Gervais, postdoctoral fellow in Casanova’s group.

The signal that the tissue cells emit is called Fibroblast Growth Factor (FGF) and the cell of the tube reacts by activating the Serum Response Factor (SRF), which is the same gene that is active in the capillaries of the circulatory system in mammals. “We have discovered how this genetic machinery acts inside the cell to ensure its reorganisation and cell-to-tube transformation.” The researchers have identified the two main players: actin –a protein linked to cell movement -, which is concentrated in the tip of the cell where it will begin to extend, and microtubules, very fine fibres that anchor on one side to actin and on the other to the opposite side of the cell. The microtubule network is like rails along which the components to be incorporated travel both to the outer membrane of the cell and the inner membrane of the tube so that both grow, while actin acts as an explorer, indicating the direction of growth. Thus, the actin and microtubule conjunction organises the lengthening of the cell and tube growth towards the target tissue. 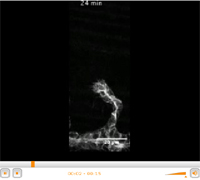 Group: Development and Morphogenesis in Drosophila