Dr. Montserrat Vendrell to head the Barcelona Institute of Science and Technology 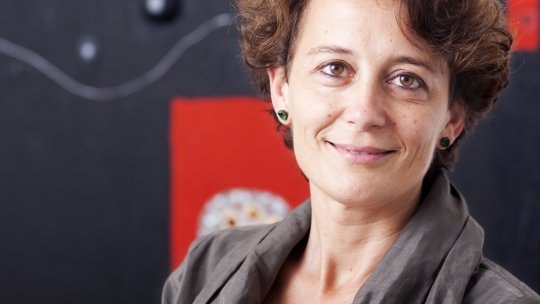 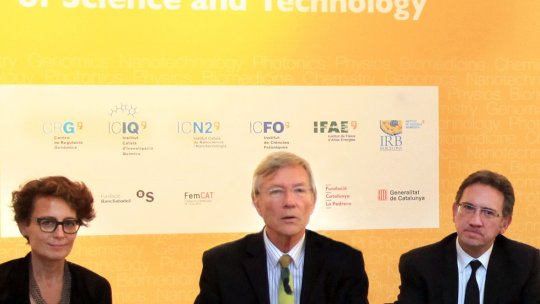 (from left to right) The director of the Barcelona Institute Dr Montserrat Vendrell, the Chairman of the Board of Trustees Prof Rolf Tarrach, and Vice-Chairman Mr Jaume Giró, Director-General of "la Caixa" Banking Foundation

The appointment of the Director marks the launch of the new institute, a scientific initiative involving CRG, ICIQ, ICN2, ICFO, IFAE and IRB Barcelona

As of September, she will be responsible for promoting interdisciplinary research strategies, tech transfer, and international graduate training with the six centres that compose the Institute

Dr. Montserrat Vendrell has been appointed director of the Barcelona Institute of Science and Technology, a new scientific institution result of the confluence of six research centres of excellence. Dr. Vendrell will take up her new post mid-September, once she has handed over her responsibilities as director of Biocat and of the Barcelona Science Park. The Board of Trustees of the Institute unanimously adopted the appointment.

The new Director will then head the joint scientific initiative of the six research centres that compose the Barcelona Institute: the Centre for Genomic Regulation (CRG); the Institute of Chemical Research of Catalonia (ICIQ); the Catalan Institute for Nanoscience and Nanotechnology (ICN2); the Institute of Photonic Sciences (ICFO); the High Energy Physics Institute (IFAE); and the Institute for Research in Biomedicine (IRB Barcelona). The goal is to undertake interdisciplinary actions that leverage the international scientific impact of the Institute. The work plan set out revolves around three cornerstones of joint action: interdisciplinary research, technology transfer, and international graduate training.

"Through the Barcelona Institute, the Catalan Research System takes another leap forward,” says Montserrat Vendrell. “From the interdisciplinarity of the six centres that comprise the Institute, we will consolidate a joint scientific initiative, build a graduate training offer that responds to current training challenges, and achieve the critical mass needed for efficient technology transfer."

The Chairman of the Board, Prof. Rolf Tarrach, has expressed his pleasure at the appointment of Dr. Vendrell: “The Barcelona Institute comes about through the collaboration of six centres in an interdisciplinary initiative, with the aim to network with other research centres of excellence: Dr. Vendrell’s experience and skills will contribute to make this spirit of achieving possible.”

Montserrat Vendrell (Barcelona, 1964) holds a PhD in Biology from the University of Barcelona (1991), a Masters in Scientific Communication from the Pompeu Fabra University (Barcelona, 1997) and a Postgraduate Business Management degree from IESE Business School (PDG-2007).

After a career path as a postdoc researcher for more than 10 years in biomedical science at the Roche Institute of Molecular Biology (Hoffmann LaRoche, New Jersey, 1992-95) and the Institut de Biologia Molecular de Barcelona of CSIC (1987-91; 1995-97), she joined the Barcelona Science Park (Parc Científic de Barcelona (PCB; 1997-2007) where she occupied various positions. In April 2007 she became the director of Biocat, the organisation that coordinates and promotes the biosciences in Catalonia, furthering collaboration with the various agents of the Research System and the BioRegió. From March 2012 until recently, Dr. Vendrell chaired the Council of European Bioregions (CEBR), the first European network of bioregions. In April 2014, she was appointed director of the Barcelona Science Park, a post that she has combined with her duties as director of Biocat.