From left to right and up to down, DNA structure movements that permit to get an idea about the mechanism by which DNA starts to unfold. (© A. Pérez)
20 May 2010

This is a key process to understand gene activity and DNA replication, and to design drugs to modulate them in the future.

The separation of the two DNA strands occurs in millionths of a second. Consequently, it is extremely difficult to study this phenomenon experimentally and researchers must rely on computational simulations. After four years of fine-tuning an effective physical model and massive use of the supercomputer Mare Nostrum, researchers at IRB Barcelona and the Barcelona Supercomputing Center (BSC) have managed to produce the first realistic simulation of DNA opening at high resolution. The scientists Modesto Orozco, group leader of the Molecular Modelling and Bioinformatics Group at IRB Barcelona, Full Professor of Biochemistry and Molecular Biology at the University of Barcelona and director of the Life Sciences Dept. at the BSC, and Alberto Pérez, “Juan de la Cierva” researcher at BSC, currently at the University of California, San Francisco, (U.S.) publish their findings in a leading international chemistry journal, Angewandte Chemie.

Alberto Pérez explains that “many of the functions of DNA come about when its two strands separate, when, for example, it has to replicate during cell division or in repair processes. With this study, we propose a mechanism for this process, which in turn, will lead to new experiments for its final corroboration”.

The researchers have studied a small DNA fragment, of 12 base pairs (the human genomes has about 3,000 million base pairs), and have obtained 10 million structural snapshots of how DNA unfolds. In this process they have revealed the two main ways by which the natural folded structure move to an unfolded state. “This project”, explains Prof. Orozco, “is part of a greater objective of the lab: to attempt to understand the changes that the DNA structure undergoes in biological processes that occur within the cell, such as the expression and repression of genes or DNA replication and transcription.”

DNA holds the genetic information of living organisms and its double helical structure was discovered more than 50 years ago by Watson and Crick. DNA and the proteins that modify it are the most important therapeutic targets in several pathologies, and particularly in cancer. The work performed at IRB Barcelona provides a detailed view of the mechanism through which one of the most crucial processes in DNA occurs, and opens up new prospects regarding the connection between physical properties, functionality and pharmacological effect. The final objective is to achieve that new breakthroughs turn DNA into a universal pharmacological target. 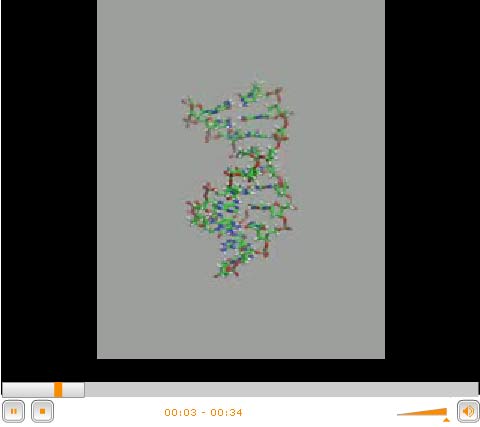 In the movie, we observe at the microsecond scale and with atomic detail, a DNA fragment unfolding. © M. Orozco lab.