Art and science: two complementary views of the world

Anna Rierola believes that scientific discoveries have always had a profound impact on art.

At the beginning of 2017, IRB Barcelona launched its Artist in Residence programme, which aims to bring artists who have an interest in science closer to researchers, data and infrastructure at the Institute. By fostering interactions between artists and scientists, the programme offers new opportunities for inspiration and reflection on both sides. Anna Rierola is the 2017 Artist in Residence.

Stepping into Anna Rierola’s studio is like diving into a poetic and colourful representation of an aquatic underworld. On a wall hangs one of her pieces, entitled “Depths”. If you look at it from a certain angle, it could be taken for a nebula. Or even a continent as seen from a satellite. A trained eye, on closer inspection, will spot nanoparticles, a mouse embryo, cardiac muscle tissue, a retina, or even brain, kidney or liver tissues. When brought together into a grand artistic collage, this artwork breathes new life into scientific images generated in research labs across Europe. 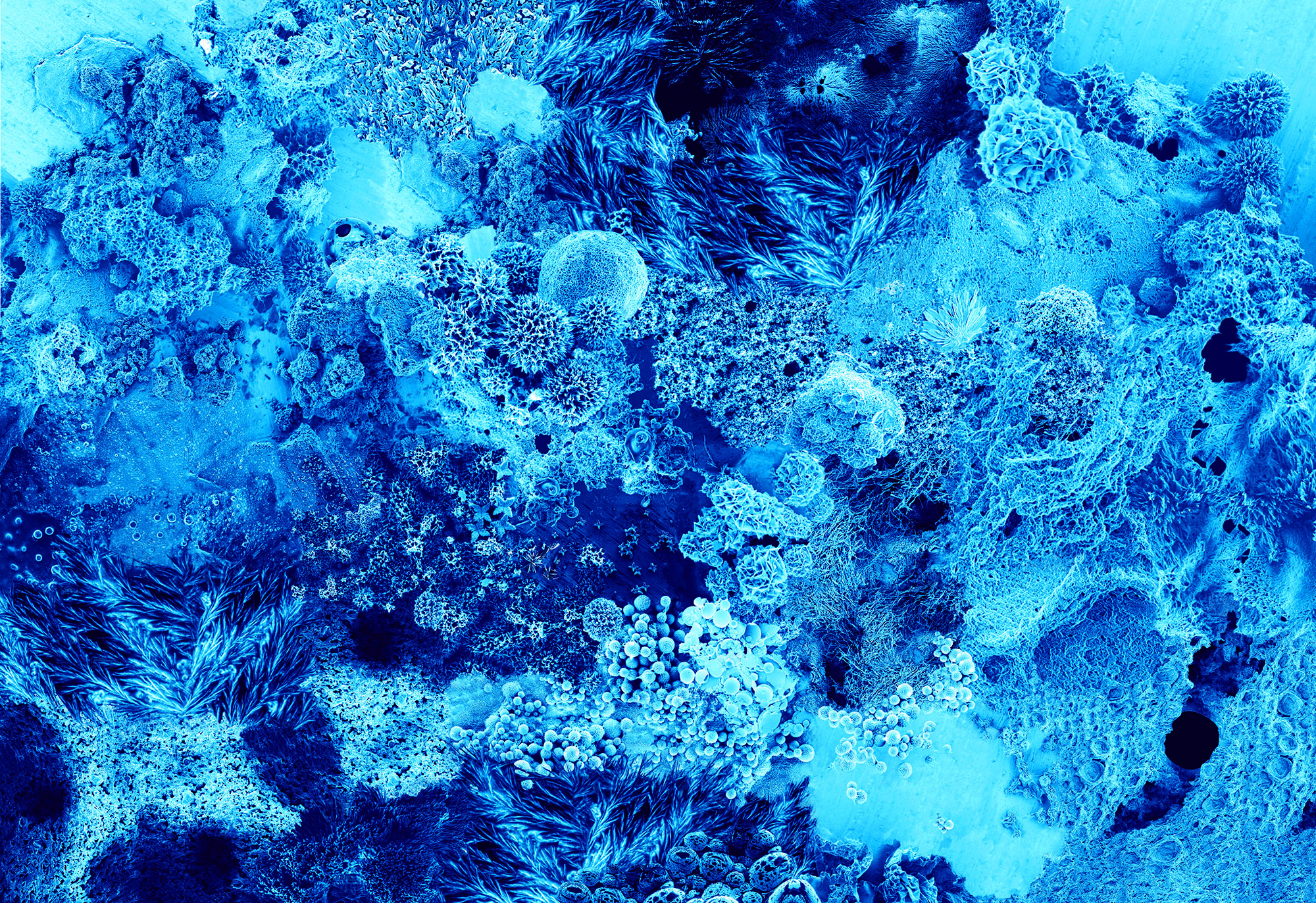 A fascination with scientific images was Rierola’s point of entry into the world of science . “I discovered that a scientific image talks to me, and questions me. It makes me feel a deep emotion, and then it takes me to a holistic vision of the world. It opens up a window on the beauty and mystery of the universe. It makes me want to investigate more.”

A scientific image, she says, communicates much more directly than a mathematical or a chemical formula, which is difficult to understand without proper training.

“Pascal once wrote that ‘Nature is an infinite sphere whose centre is everywhere and whose circumference is nowhere.’ I find this quote inspiring,” says Rierola. “This explains why I like to explore the infinitesimal world and the immense universe. Even scientists admit that in many ways, the two look very much alike.” Phenomena combining the large and small scales, such as fractals, serve as inspiration: “I am fascinated by the idea that each part of the universe contains itself at a smaller scale, like a Russian doll,” she says. “At IRB Barcelona, I’m learning about the organisation of the different systems, from molecules, cells, organs, systems, up to the human body. It is captivating to see how inside each cell order is created from chaos, and that when order is lost, diseases appear. Scientists try to re-establish order and cure diseases, and improve people’s quality of life. I’m privileged to be able to observe them while they do it.”

Of course, Rierola’s approach to a scientific image differs greatly from that taken by scientists. “A picture is not a scientific document per se,” she explains. “I use it for its expressive potential, sometimes even in a different field to where it came from. A biological image can portray the depths of the sea in a way that reminds me of the incredible illustrations I saw in a book by the 19th-century oceanographer C.W. Thomson. Through scientific images, I try to shuck off the complexity of the reality. The real texture of reality is unreachable for human imagination. With my work, I try to visualise this complexity.”

To compose her works of art, Rierola transforms researchers’ original images using Photoshop. She manipulates the composition, sometimes adding colours to black and white images. Some of her artistic installations even incorporate sound. Retaining the scientific knowledge within the images is very important. “I want my work to transmit an emotion, of course. But it’s not just aesthetics. I want it to transmit knowledge, a world view.”

The Artist in Residence is currently visiting research groups and core facilities at IRB Barcelona to find out about their scientific experiments. “I want to understand what they do, so I ask them to explain it to me through their images,” she says.

Rierola doesn’t yet know yet what will come of her “research”, as she defines the experience at IRB Barcelona. She hopes that over the course of her year-long residency, she can create artwork “ with its own expressivity, that will emerge from all the input I’m receiving.” Her attention is now concentrated on cell behaviour. “I am attracted by the similarity of cell interactions to sociological systems. Gene expression is another aspect that resonates with me. A researcher compared a gene to a word in a text: depending on the context, the word may mean different things. Gene expression works in the same way.”

Science and art are really not that different after all. “Science is looking for something – it’s a way to discover reality and how it works and to connect different pieces of knowledge, often in a non-linear way. In the end, you discover a pattern, an explanation. Science is also restlessness, it’s creativity, it’s the capacity to ask original questions. Art is a form of research, and a very special way of looking at the world and questioning it. Like scientists, artists focus on a specific aspect of the world that concerns them the most.”

There have always been strong bonds between art and science. Leonardo da Vinci is the most known example of an artist who was also a scientist. Santiago Ramón y Cajal, one of Spain’s most influential scientists, used his artistic skills to explain his research. As Rierola explains, science was at the heart of most 20th-century Art Nouveau and avant garde artwork. “Traditionally, the history of art is explained in terms of philosophical, political and historical contexts. But what science was like at the time is never explained. Good examples are Vassily Kandinsky, who discovered a new world looking through a microscope, or artists as Malevich, Brancusi and Dalí, who incorporated the shape of DNA in their work,” adds Rierola. “In the 90s, the concept of bioart was introduced, a combination of art, biology and technology. As you can see, scientific discoveries have always had a profound impact on art,” she says. “How could it be otherwise? Science offers a world view that completes your own.”

Artists and scientists interested in participating in the programme should contact the Office of Communications and External Relations for more information.

A new creative in our midst

Antony Nevin, IRB Barcelona’s 2019 Artist in Residence, has travelled from his home in “the land at the end of the world”—New Zealand—to spent time with us and get inspired by our science.

The newspapers Ara and La Vanguardia have published an article on the exhibition "Art made of science. Microspheres" by Ayse Gül Süter, Artist in Residence from IRB Barcelona, which is being shown in the old operating theatre of the Sant Pau Art Nouveau Site. Gül Süter’s work is a particular choreography of diseased and healthy cells that has been inspired from the observation of tissues of the liver, eyes, skin and lungs.

La Vanguardia has published an article about the exhibition "Art Made of Science-Microspheres" by Ayse Gül Süter, Artist in Residence at IRB Barcelona, which explores the visual differences between healthy and diseased tissues. The exhibition opened on February 12 at the Sant Pau Art Nouveau Site and can be visited until March 12.