The High-Throughput Proteomics era has begun

IRB Barcelona steps into High-Throughput Proteomics. After passing an external evaluation, the Mass Spectrometry Core Facility has been renamed “Mass Spectrometry and Proteomics Core Facility”. Its mission is “to apply advanced proteomic methods to help researchers study diseases, pathways, targets and drugs effects,” says Core Facility manager Marta Vilaseca, who emphasises the contribution of her team to cutting-edge research at the Institute.

The facility has recently been enlarged and now occupies an additional area in the PCB to host a new Orbitrap Fusion Lumos, which has just been installed and is fully operational. Marta is looking forward to making the best use of this powerful analytical tool. 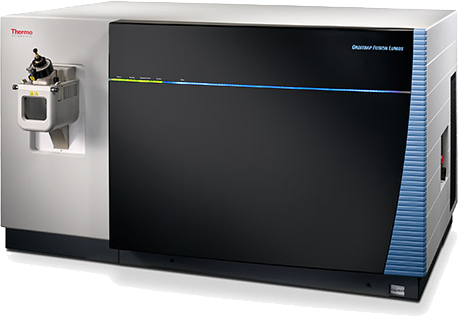 “Obitrap has a lot of technical advantages with respect to our previous instruments,” she says. “The most important features of three types of mass analysers are found in a single instrument, making Orbitrap faster, more sensitive and more versatile.”

“Thanks to this new mass spectrometer, we will be able to identify thousands of proteins, gain further insights into their post-translational modifications, mutations and splice variants, and quantify them in a high-throughput manner. Using quantitative proteomics strategies, we will be able to have full proteome data sets in a reasonable timeframe— a few hours per cell line. Orbitrap allows the simultaneous comparison of up to 10 cellular states, including biological replicates, and this feature results in a significant saving of time,” explains Marta.

Marta believes that these characteristics will allow IRB Barcelona scientists not only to be competent in the well-established classical bottom-up proteomics, but also to pioneer the top-down—or intact-protein—approach.

Bottom-up high-throughput proteomics techniques involve protein digestion with enzymes—a process that breaks them up into peptides. On the basis of the molecular weight of the peptides and the fragments thereof, scientists can deduce information about the identity of the proteins present in a given sample and about their modifications.

In contrast, the top-down approach does not involve protein digestion but allows researchers to work with intact proteins in the gas phase. “The fragmentation happens directly inside the mass spectrometer,” says Marta. “When proteins are digested, part of the information is lost. An example of this is that the combinatorial effects of multiple post-translational mutations occurring on the same polypeptide chain cannot be deduced.”

Marta emphasises that “by measuring and quantifying whole proteins, we achieve more reliable identification and better characterization of individual proteoforms”—a term that denotes the different molecular forms in which the protein product of a single gene can be found.

“The advantage of the top-down philosophy is that it can make these distinctions,” says Marta. “The two approaches are complementary. The bottom-up approach is more developed both technically and in terms of data analysis, whilst the top-down concept is still under development. But its potential is enormous. Combining both approaches can give a deeper understanding of the biological processes that determine human health and the development of disease,” she adds.

“Mass spectrometry and proteomics can help answer complex biological questions. I encourage researchers to come and discuss their scientific challenges with us,” she says. “We will accompany them as they step into the High-Throughput Proteomics era.”

Marta Vilaseca: "The information provided by mass spectrometry facilitates the understanding of diseases"

The latest Meet Our Scientists series is devoted to Marta Vilaseca, manager of the Mass Spectrometry & Proteomics Core Facility at IRB Barcelona.

The video "Proteins caught in fraganti" presents her specialised field.