Promising compounds against a cancer target 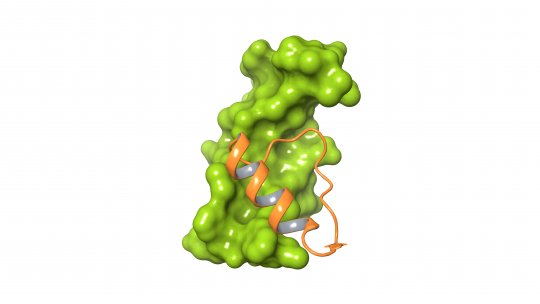 The compound Cp28 (orange) binds to the EGF protein (green), a target in cancer. This interaction prevents EGF from binding to its receptor EGFR.

The molecules synthesized by Ernest Giralt’s lab at IRB Barcelona bind a key protein in cancer that has received little attention as a therapeutic target.

The long-term goal is to provide a new chemotherapy treatment.

Advances in new treatments for diseases, including cancer, come about from innovative research with therapeutic potential. This was the starting point for the Peptides and Proteins Lab at the Institute for Research in Biomedicine (IRB Barcelona) three years ago when it began to design compounds that block the binding of Epidermal Growth Factor (EGF) to its receptor (EGFR). The interaction between these two proteins accelerates the metabolism of tumour cells, thus favouring their growth and division.

In fact, a monoclonal antibody, Cetuximab, is already being used in chemotherapy. This drug interferes with EGFR to prevent its binding to EGF; however, tumour cells eventually become resistant, and this treatment stops being effective for many cancer patients. There is currently no drug on the market to tackle EGF, but biomedical chemists at IRB Barcelona have taken the first step towards addressing this problem. In an in vitro study using cancer cells, the researchers have tested a series of peptides—small proteins—that bind to EGF and impede interaction with its receptor.

“In this study, we demonstrate that EGF, a highly elusive and versatile protein with respect to the shape it adopts, is a viable drug target. Furthermore, it is worth noting that we still don’t have compounds that are strong enough to allow us to progress towards studies in animal models. But we are heading in the right direction and are opening up a new avenue,” says Ernest Giralt, head of the lab and co-leader of the study together with Laura Nevola, an associate researcher in his lab.

PhD student Salvador Guardiola has synthesized nine peptides and has tested their efficacy using various biophysics techniques. One particular peptide, called cp28, which has a very similar structure to that of EGFR, has given the best results.

Peptides are short chains of amino acids “with immense potential as drugs because they can show target specificity, they can be synthesized in the lab, and they are cheaper and more robust than antibodies,” explains Guardiola, whose studies at IRB Barcelona are being funded through a “la Caixa” International PhD fellowship.

For a peptide to have a future as a drug, it must have certain characteristics, such as strong binding to the target—referred to in science as having high affinity—, which indicates the degree of specificity, and sufficient duration in blood. “We always attempt to design peptides that have these features as they are a prerequisite for drug design purposes,” explains Guardiola.

Regarding the continuity of the project, Giralt, also senior professor at the University of Barcelona, says, “Now we have validation of the proof of concept and are able to continue exploring EGF as a target. The next step is to design more and better compounds in order to extend the library of peptides that act against EGF,” says Ernest Giralt.

The results have been presented in the specialized chemistry journal ChemBioChem.