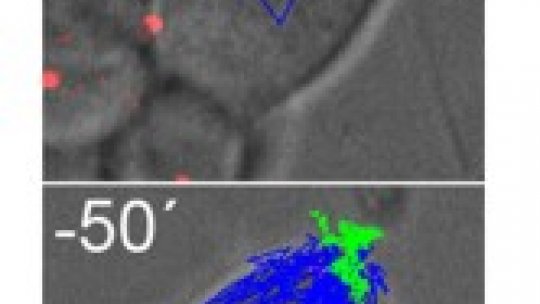 Visualization in vivo of centrosomes (red) in a Drosophila stem cell, from the beginning of the cell cycle to seconds before division occurs. The trajectory of the apical and basal centrosomes are shown in green and blue. the apical is in a fixed position

The study appears this week in the scientific journal Developmental Cell.

Stem cells have the extraordinary capacity to divide producing two very distinct cells: one retains stem cell identity and continues to undergo asymmetric division, while the other specializes for a specific function and shows limited capacity to divide. This strategy allows a single stem cell to generate great amounts of tissue during a lifetime.

To ensure the correct differential identity of the resulting cells, the complex apparatus that divides that stem cell in two must form along a pre-established axis. If this does not occur, the division may be symmetric, which will generate two identical stem cells. That is to say, instead of producing tissue, the stem cells with a “disoriented” division axis may give rise to more stem cells; this is potentially dangerous for the organism as it would lead to uncontrolled proliferation of this type of cell.

How is this danger avoided? Researchers headed by Cayetano González, ICREA Research Professor at IRB Barcelona, have studied stem cell division and discovered that one of the key factors lies in the behaviour of the intracellular structure known as the centrosome. Most animal cells have two centrosomes before division takes place and their position governs the direction of the division. In cells that divide symmetrically (giving rise to two identical cells), the two centrosomes of cell are practically identical. Surprisingly, Gonzalez and his team found striking differences in the two centrosomes of the stem cells they were studying. One is located in a fixed position and is very active during the entire cell cycle, while the other moves around the cell before coming to a standstill, becoming activated only seconds before division.

The intracellular asymmetry of two functionally distinct centrosomes is a decisive factor in the regulation of asymmetric stem cell division and prevents the proliferation of these cells.

The most surprising aspect of this complex behaviour is its precise regulation. The imaginary line that passes through the centrosomes once they are both in position, coincides perfectly with the orientation in which the stem cell must divide to guarantee the asymmetry of daughter cells. The intracellular asymmetry of two functionally distinct centrosomes is a decisive factor in the regulation of asymmetric stem cell division and prevents the proliferation of these cells.

These studies have been possible thanks to sophisticated technology that combines the generation of genetically modified flies in which normally colourless cell components are stained, with advanced high resolution microscopy techniques, thereby allowing in vivo observations.

Elena Rebollo, member of the research team and first author of the study, explains that “thanks to these techniques and to hundreds of hours of filming, we have been able to observe the step-by-step process of stem cell division. We’ve even been able to identify one of the proteins that differentiates the centrosomes of the stem cell”. “This protein”, explains González, “is one of the tumour suppressors that we described in 2005, which suggests that the centrosome plays a key role in preventing these stem cells from becoming malignant; a question to which we are currently devoting considerable research effort”. These studies form part of a research line on the relation between stem cells and cancer followed by this laboratory (see press release: A new link between stem cells and cancer, 5 september 2005).