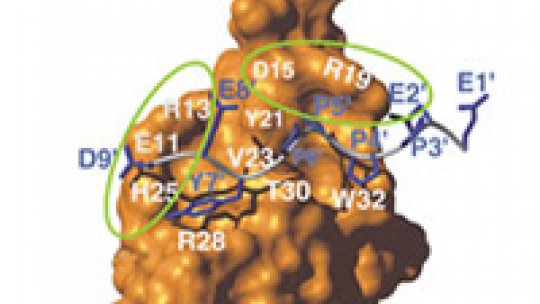 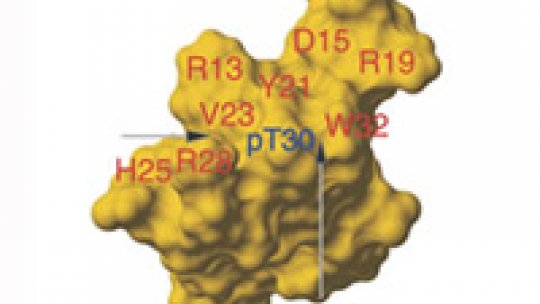 The ubiquitin ligase with the phosphorylated T30 position (indicated in blue with arrows) does not bind to the LMP2A protein.

Unless you are a molecular biologist, you may not have heard the term ubiquitin. Given its essential role in the cell, however, it is likely that its protagonism and popularity will increase. One of the processes in which ubiquitin plays a relevant role is in the degradation of proteins. In the cell, the generation of proteins is just as important as their destruction, as well as the maintenance of a correct balance between both processes.

Proteins become candidates for degradation when they are defective, when they have completed their function and are no longer necessary, or when they belong to pathogenic organisms. Ubiquitin attaches itself to these proteins as if it were an identification card, in a process called “ubiquitination.” These “catalogued” proteins are then sent to the proteasome, a protein complex found throughout the cell, to be degraded.

This “catalogue and clean” mechanism was discovered in the 1970s and its relevance to cell life is becoming increasingly evident. Various degenerative illnesses and tumours may be related to errors in this system, which causes defective proteins to accumulate instead of being immediately destroyed. It is also believed that viruses have mechanisms which enable them to avoid to be identified by ubiquitin and thus destroyed. An increasing number of research groups worldwide are focusing their efforts to understand how ubiquitin functions.

One of these groups is led by María J. Macías, ICREA researcher at the Institute of Biomedical Research in Barcelona (IRB Barcelona), who published a paper this month in the journal Structure edited by Cell Press. “We wanted to know how ubiquitination is regulated. We knew how a ubiquitin ligase called Itch, an enzyme in charge of adding ubiquitin to the target protein, recognises the proteins to degrade. What we didn’t know was how to control or inhibit this recognition,” says Macías.

María and her group discovered one of the ways in which recognition can be inhibited. The researchers used a functional unit present in the ubiquitin ligase Itch, and a sequence of the protein of the LMP2A membrane of the Epstein Barr virus, a herpes virus which causes mononucleosis and which has been associated with tumours such as Burkitt’s lymphoma and nasopharyngeal cancer.

The LMP2A membrane is responsible for the interaction with the ubiquitin ligase Itch. This interaction takes place through the recognition between a sequence (PPxY) in the virus and a functional unit (WW domain) in the ligase. When recognition occurs, one or several units of ubiquitin are transferred to LMP2A, which then becomes susceptible to degradation.

The researchers already knew how both molecules bind and were thus able to obtain several versions of ubiquitin ligase in the laboratory with small structural changes at specific points in order to see if this could affect the recognition process. They added, for example, a phosphate group to two concrete positions of the WW domain through a process known as phosphorylation, a common step in the regulation of many cellular processes.

The results showed that when the phosphate group is added at a specific point (called T30, for amino acid threonine 30 of the WW domain), the ubiquitin ligase does not recognise the binding. As a consequence, ubiquitin fails to link up with the virus protein and escapes degradation. They also observed that phosphorylation in another position (in the sequence joining the WW domain) does not inhibit the recognition but reduces it substantially. This indicates that phosphorylation is one of the mechanisms which reduces or inhibits the ability of ubiquitin ligase to recognise its target. The novelty of the project developed by the researchers at IRB Barcelona is the finding that the ubiquitin-ligase Itch occupies the critical T30 position. “By phosphorylating this position,” Macías explains, “we were able to inhibit the binding of the ubiquitin to the virus protein.”

“We know,” she continues, “that the viruses take control of the cellular machinery that produces proteins, including kinases, which are enzymes responsible for adding phosphate groups to other molecules.” With this strategy, viruses assure their survival in the host. The researchers are now considering whether viruses, upon making the kinases, are phosporylating the ubiquitin ligase in order to escape recognition. “But this is still just a hypothesis,” cautions Macías. “What we know is that phosphorylating this vital point blocks the recognition of the viral protein.”

The study opens new expectations. Damaged proteins, if not degraded, can continue working improperly, accumulate and generate a cascade of effects that can lead to disorders such as cancer. In this sense, it is known that the ubiquitin ligase with which the investigators have worked has transcription factors like the JunB, the CJun or the p75, among its targets, all of which are associated with the development of tumours. These proteins share the same recognition sequence in the ubiquitin ligase, called PPxY. Scientists can now focus their efforts on identifying the link among the three protagonists, virus, ubiquitin-ligase and proteins that escape the degradation, in order to explain the role that viruses like Epstein Barr play in the development of some cancers.