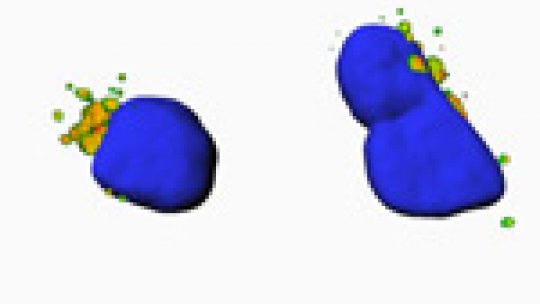 Researchers discovered the role of DOR (red) when they found it co-localizing with LC3, the common autophagosome marker. In blue, cells nuclei. Image: 3D simulation. A. Zorzano Lab © IRB Barcelona.

EMBO Reports selects a study by researchers at IRB Barcelona as the highlighted article of the week because of the relevance of autophagy in health.

All cells are equipped with a recycling programme to collect and remove unnecessary cellular components. Autophagy sequesters and digests aged organelles, damaged proteins and other components, which, if not disintegrated and recycled, threaten cell viability. Researchers at the Institute for Research in Biomedicine (IRB Barcelona) led by Antonio Zorzano, head of the Molecular Medicine Programme and senior professor of the University of Barcelona, have identified a new gene that favours cell autophagy. The article has been published in EMBO Reports, which highlights it in the section “Hot off the press”.

One of the main challenges in biomedicine is to decipher the complete map of genes –and their products, the proteins – that regulates autophagy in cells. “The interest lies in its association with human diseases”, says Zorzano. There is increasing evidence of a link between autophagy and the appearance and progression of cancer, neurodegenerative pathologies, infections and aging. For example, several studies demonstrate that some neurodegenerative diseases caused by the abnormal aggregation of proteins, such as Huntington’s disease, are associated with reduced autophagy. Pharmacological induction of this process could help to remove the cellular protein aggregates and to relieve the symptoms.

Caroline Mauvezin, PhD student with Zorzano and first author of the article, says that “it is possible to envisage future therapies based on the modulation of autophagy”. However, further knowledge about this pathway and its components are required as well as a complete understanding of the precise role of autophagy in each disease in order to be able to manipulate it for therapeutic purposes. “We have identified a new player and now we have to study it in depth”, says Mauvezin.

The study reveals that the DOR protein is involved in the initial, and most unknown, stages of autophagy. DOR facilitates the formation of autophagosomes, the structures that envelop, capture and transport components to lysosomes. Autophagosomes fuse to lysosomes to form autolysosomes, where several enzymes finally remove the unwanted or harmful intracellular debris.

Using in vitro cells and the fruit fly Drosophila, the researchers have demonstrated that the autophagic capacity of a cell decreases in the absence of DOR. This new gene in the autophagic pathway opens up many avenues of study, for example examining whether DOR is active or silenced in tumour cells. But the scientists are prudent with respect to the planning of future studies. “First we have to determine the precise function of DOR in the autophagic pathway in rat models in vivo, in order to determine its relevance and to identify all the proteins that it is associated with in this context”, explains Zorzano.