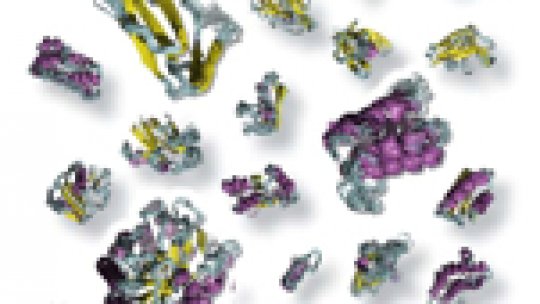 The movement of proteins is basic to understand its function

The study appears in this week’s online version of the prestigious scientific journal Proceedings of the National Academy of Sciences.

Scientists from the Institute for Research in Biomedicine (IRB Barcelona), the Life Sciences Programme at the Barcelona Supercomputing Center (BSC) and the National Institute for Bioinformatics (INB) have published a provisional “atlas” of the dynamic behaviour of proteins in the prestigious scientific journal, Proceedings of the National Academy of Sciences USA. Proteins determine the shape and structure of cells and drive nearly all of a cell’s vital processes. All proteins carry out their functions according to the same process – by binding with other molecules. Now, the scientists have compiled a map that shows them how proteins can move and form complexes, a valuable tool that will help them understand the basic functions of the molecules, but also what happens when they function incorrectly. Such a map opens vast possibilities for the design of new drugs.

"In the near future, a biochemist will be able to understand the behaviour of a protein, or design a drug that can interact with that protein, drawing on not only the knowledge of a single structure, but of an entire repertory spontaneously occurring in physiological conditions,” says project director Modesto Orozco

The goal of this study is to define a map of the dynamic properties of a very representative group of proteins. This involves taking stock of the basic rules that govern the flexibility of proteins and allows scientists to predict the structures that these proteins can form based on the presence of ligands or modifications. This allows scientists to go beyond the traditional simple static vision of proteins, which has not been able to capture the subtle conformational changes necessary for proteins to function. These changes modify, for example, how proteins bind to metabolites or drugs.

This is the first study of a larger scientific project, called MoDel (Molecular Dynamics Extended Library), the scope of which is even more ambitious. “MoDel aims to establish a ‘fourth dimension’ for protein structures thereby providing a complete landscape of possible conformations for the entire proteome (the complete network of protein interactions in a cell), over time. In the near future, a biochemist will be able to understand the behaviour of a protein, or design a drug that can interact with that protein, drawing on not only the knowledge of a single structure, but of an entire repertory spontaneously occurring in physiological conditions,” says project director Modesto Orozco, principal investigator of the Molecular Modelling and Bioinformatics group at IRB Barcelona, director of the Department of Life Sciences of the BSC, and Professor in the Department of Biochemistry at the University of Barcelona.

The project, financed by Genome España (through the National Institute for Bioinformatics), the Ministry of Education and Science, and the Government of Catalonia, is the joint effort of a multidisciplinary team of 15 scientists using the computing resources of the MareNostrum supercomputer, the most powerful computer in Europe, and ranked 5th in the world. During the past year, the study has involved half a million hours of computing time and 200 processors working in parallel – the equivalent of 57 years of computing time on a personal computer. “To attempt this project without the MareNostrum supercomputer would have simply been impossible,” affirms Professor Orozco. Indeed, powerful tools such as MareNostrum are allowing bioinformaticists to make unprecedented advances in the understanding of biological processes.