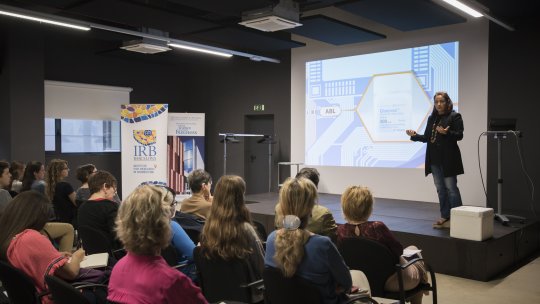 Protein interaction networks represent the backbone of the cell’s functional organization. Their architecture relies on the specificity of these interactions. Mutations that alter specificity may rewire the network and the way it corrdinates biological processes, and lead to diseases or functional innovations. Understanding how the sequence of a protein determines the specificity of its interaction profile thus represents an important step towards a model of the genotype-phenotype map. To adress the sequence-function relationship`in protein-protein interactions, we conducted a deep mutational scanning of the entire human basic leucine zipper (bZIP) interaction network. This interaction domain family, composed of 54 members in humans, has served as a model system for the study of protein interaction specificity. While the general rules of bZIP specificity are relatively well known, it remains impossible to predict interaction partners accurately. Using our established deepPCA system, we measured the effect of all single amino acid substitutions in all 54 members, on the interaction with all 54 wild-type members. This dataset of ~2M quantitative protein-protein interaction measurements will enable training a deep neural network that captures the sequence-function relationship in order to quantitatively predict interaction between bZIPs from sequence alone. I will present the dataset and the deep learning model, as well as preliminary data on two other families, basic helix-loop-helix and SH3 domains, for which we plan to collect 6 and 20M data points, respectively. We foresee that applying this strategy on a variety of domain families of different architecture will enable the development of general models that can predict the affinity of an interaction from the sequenece of the two partners.

IMPORTANT: For attendees outside the PCB community you must register at least 24h before the seminar.