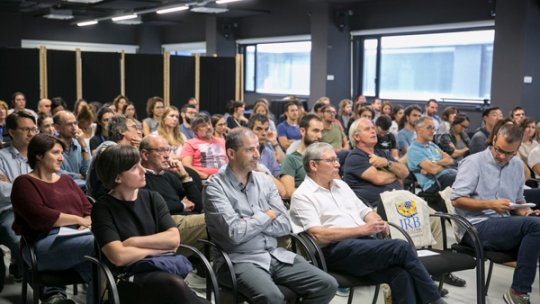 KRAS oncogene transcription is controlled by a G-rich motif (called 32R), located immediately upstream of the transcription starting site (TSS). 32R is known for being polymorphic, with two principal G-quadruplex conformers in thermodynamic equilibrium, G9T (TM= 61.2 °C) and G25T (TM=54.7 °C). Both conformers have the ability to recruit hnRNPA1 regulatory protein and promote several contacts with the RRM protein domains.  A truncated version containing only the RRM motifs (UP1) display similar binding properties. Following the DNA imino protons by 1D NMR spectroscopy, shows that, upon binding to UP1, G25T is readily unfolded at both 5’ and 3’ tetrads, while G9T is more resistant to the protein action. The impact of hnRNPA1 on KRAS expression was determined by comparing Panc-1 cells with two Panc-1 knockout cell lines in which hnRNPA1 was deleted by the CRISPR/Cas9 technology. The results showed that the expression of KRAS is inhibited in the knockout cell lines, indicating that hnRNPA1 is essential for the transcription of KRAS. In addition, the knockout cell lines, compared to normal Panc-1 cells, show a dramatic decrease in cell growth and capacity of colony formation. Pull-down and Western blot experiments indicate that conformer G25T is a better platform than conformer G9T for the assembly of the transcription preinitiation complex with PARP1, Ku70, MAZ and hnRNPA1. Together, our data prove that hnRNPA1, being a key transcription factor for the activation of KRAS, can be a new therapeutic target for the rational design of anticancer strategies.