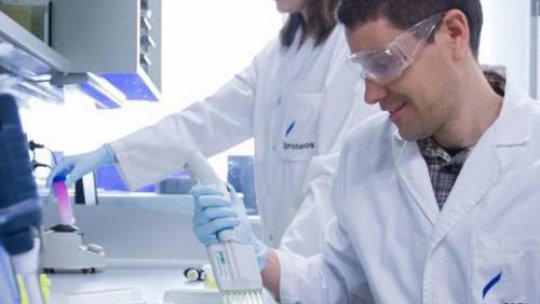 Iproteos is currently performing the regulatory preclinical phase of its drug candidate for CIAS treatment.

Compound IPR19, a drug to stop the progression and reverse the cognitive deficits associated with schizophrenia.

The biotech company and IRB Barcelona spin off Iproteos, in collaboration with the Neuropsychopharmacology Group at the Universidad del País Vasco—Centro de Investigación Biomédica en Red de Salud Mental (CIBERSAM)— and the Proteins and Peptides Lab at IRB Barcelona, has published an article in the journal European Neuropsychopharmacology demonstrating the efficacy of a new precognitive drug for the treatment of schizophrenia.

Named IPR19, the compound reverts the Cognitive Impairment Associated with Schizophrenia (CIAS) through the modulation of a new mechanism of action. The target has not been explored to date for this disease, thus further highlighting the novelty of the work. Many potential drugs are unable to cross the blood-brain barrier (the membrane that protects the central nervous system), thus blocking their therapeutic applications. In contrast,  IPR19 is not only a stable and non-toxic drug but it has the capacity to cross this barrier and enter the brain, where it exerts its action.

“It is the first time that a compound of these characteristics has been demonstrated to have potential for the treatment of CIAS. IPR19 marks a starting point for the generation of novel therapies for this condition, for which no treatment is currently available,” comments Roger Prades, author of the paper and IRB Barcelona alumnus.

The efficacy of this drug has been tested in animal models of schizophrenia. In this regard, the drug action has been validated in three mouse models characterized by a deficit in cognitive function. Through a battery of tests that evaluate working and spatial memory, the scientists demonstrate that IPR19 reverts the cognitive deficits shown by these animals, bringing them back to basal levels.

“This publication is a significant achievement for Iproteos, since it implies the validation of our schizophrenia project by the expert international neuropsychopharmacology community,” says Teresa Tarragó, CEO of Iproteos. “Collaboration with Prof. Javier Meana’s group at the Universidad del País Vasco and with CIBERSAM has been key in demonstrating the efficacy of our drug. The publication of this paper is yet further proof that public-private sector collaboration, if properly managed, can greatly benefit the Spanish research environment”.

Clinical trials in humans are planned for 2018

Iproteos is currently performing the regulatory preclinical phase of its drug candidate for CIAS treatment. The company recently closed a funding round, led by Caixa Capital Risc, for undertaking these experiments. It is planned that the drug will be tested in clinical trials in humans in 2018.

Schizophrenia is a heterogeneous disease that affects 45 million people worldwide. The clinical signs are classified into three symptom groups: positive (speech, thought and behaviour disturbances, hallucinations, delusions), negative (apathy, anhedonia), and cognitive (reduced ability to pay selective attention, difficulty processing social and emotional information, impaired working memory). Although treatment options are available for the first two symptom groups, CIAS is an unmet medical need. This condition impedes patients from having a normal life (estimated 90% unemployment rate among schizophrenia patients). According to the World Health Organization (WHO), schizophrenia is one of the most disabling diseases known.

Given the need for procognitive drugs, Iproteos’ discovery opens up new avenues in this field.

Located at the Barcelona Science Park (Parc Cientific de Barcelona), Iproteos is a spin-off from the Institute for Research in Biomedicine (IRB Barcelona) and the University of Barcelona, with the strategic participation of the Bosch i Gimpera Foundation. The biotech company focuses on the discovery of third-generation drugs for disorders of the central nervous system, and it has received financial support from ACCIÓ, the Agency for Business and Enterprise Competitiveness of theGeneralitat de Catalunya, the Ministry of Economy and Competitiveness, and the Centre for Industrial Technological Development (CDTI).