An interview with Marina Salvadores, PhD student at IRB Barcelona 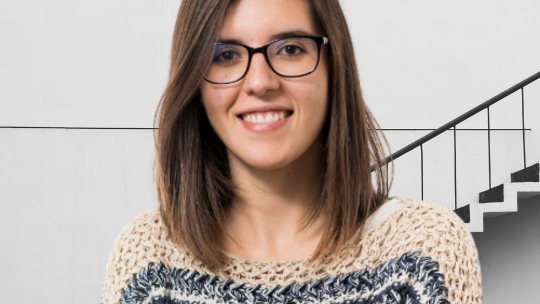 Marina Salvadores, a PhD student in the Genome Data Science Laboratory at IRB Barcelona, ​​is the first author of a study published recently in the journal Science Advances. The work reveals that around 81% of the cell lines used to study cancer show a high degree of similarity with the tumour of origin. This finding implies that the remaining 18% differ considerably from the tumour that they supposedly represent, 7% matching a different cancer type. The group has also drawn up a list of 366 “validated” cell lines that reliably represent the tumour of origin.

In this interview, she tells us how the process of discovery went, the most important results they have obtained and why she decided to leave her hometown (Oviedo) and move to Barcelona.

Tell us about what you studied and why.

I hold a degree in Biotechnology from the University of Oviedo and a Master's in Bioinformatics for Health Sciences from the Pompeu Fabra University. I got into biotechnology because molecular biology and genetics were what most fascinated me at secondary school. Also, biotechnology was a good degree available in my city.

During my degree, I gained some notion about bioinformatics, and although I didn’t fully appreciate what it was about (since little attention was given to it in the degree course), I decided to sign up for the master’s course at the Pompeu Fabra University to learn more. Luckily, I found out that I really liked it.

How did the discovery recently published in the journal Science Advances come about?

Well... it was a serendipitous finding. A labmate, Jurica Levatic, works with mutational signatures—he studies the types of mutations that are characteristic of specific origins. For example, ultraviolet light causes characteristic mutations, as do tobacco and other mutational agents, and these leave a mark on DNA. Jurica was analysing mutations in a colon cancer cell line and saw that it had mutations typically caused by ultraviolet light, and he discussed this with Fran Supek, head of the laboratory. At that time, I was working on some predictive computational models, so I started analysing these two cell lines and, in the end, this led to a year and a half project in which we have examined more than 600 cell lines!

Why are your results important?

The results are important, first because they are unexpected. None of us expected to discover that these cell lines were misclassified. Although only a few are poorly classified, it’s important to be aware of this because if you think you are doing an experiment with lung cancer cells and it turns out that they correspond to melanoma, the results probably cannot be extrapolated if the mechanisms you are studying are specific for a type of cancer. We also found that 18% of cell lines bear little resemblance to the type of tumour of origin, so they can alter the results of the experiments.

How, in your opinion, could the presence of women in this field be boosted?

It is true that there are no women or very few working in pure computer science, but this is not as pronounced in bioinformatics. For example, in the master’s course that I did, the split was 50% women and 50% men.

I still have not come across totally male-dominated situations. Also, since PhD students enter IRB Barcelona by year group, we interact a lot with those who are from our year. Those who work in bioinformatics and non-bioinformatics disciplines are all together, and there are many more women doing their PhD work in the wet labs (laboratories). The problem is that as you advance in your scientific career, the presence of women decreases, and that is what needs to be addressed.