And in the beginning was histone 1 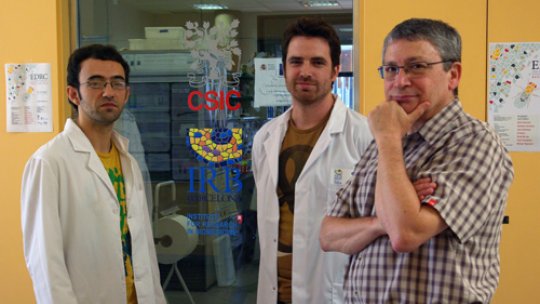 A team at IRB Barcelona identifies an essential protein for embryonic viability during the first cell divisions in the fly Drosophila.

This protein, called dBigH1, which is a variant of histone 1, could also be associated with fertility issues.

A zygote is the first cell of a new individual that comes about as the result of the fusion of an ovule with a spermatozoid. The DNA of the zygote holds all the information required to generate an adult organism. However, in the first stages of life, during the so-called embryogenesis, the genome of this zygote is repressed and does not exert any activity.

In the fly Drosophila melanogaster, the genomes of the zygote are repressed until the thirteenth division, after which the embryo starts to express its own genes. Headed by Ferran Azorín, also CSIC Research professor, the Chromatin Structure and Function group at the IRB Barcelona has identified a protein in Drosophila that keeps the zygotic genome inactive until the correct moment. This function is vital for embryo life because without dBigH1 the genome is switched on too early and the embryos die. The results are published in Developmental Cell, the most important journal of the Cell group devoted to development.

This is the first time that scientists have described a specific function of histone 1 during embryogenesis. Although this protein is present in the first embryonic stages of humans and mice, nothing is known about its function.

“The fact that now we have also detected this protein in Drosophila has allowed us to study its vital activity during early stages of embryonic development more quickly and efficiently,” explains Salvador Pérez-Montero, PhD student and first author of the study, and Albert Carbonell, postdoctoral researcher who joined the project a year ago. “If this same function is conserved in humans, its alteration could be related to gestational disorders or early miscarriage,” says the head of the group Ferran Azorín.

The scientist goes on to explain that “they are not disorders —in the true sense— that are commonly treated and, in fact, problems during gestation can arise for many different reasons.”

The protein dBigH1 could also be related to male and female fertility. In this study the scientists have revealed that this molecule plays a fundamental role in fly embryogenesis, but they are now focusing on defining the function of this protein in germinal cells.

The so-called germline comprises the sex cells, namely the cells that give rise to ovules and spermatozoids, and thus the very cells responsible for passing down genetic information from one generation to another. In the Drosophila embryo, even in the first divisions about 40 germline cells separate and differentiate and all of them express the protein dBigH1.

The scientists already have the first functional results, which point to dBigH1 regulating sperm production in males and ovule production in females. “When this gene is removed, this process is totally disrupted,” explain the researchers.

The next paper is expected to reveal whether there is indeed a relationship between the protein dBigH1 and individual fertility, and if so, the potential biomedical applications of this new discovery.