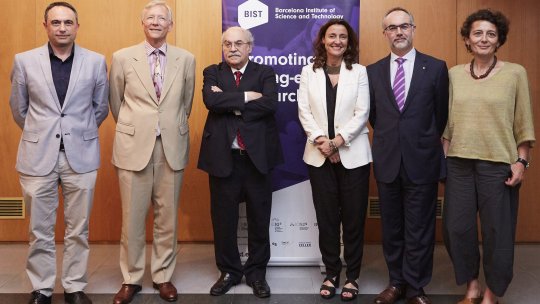 The outgoing president, Rolf Tarrach, will remain on the board of trustees

The board of trustees of the Barcelona Institute of Science and Technology (BIST), a joint interdisciplinary scientific initiative comprising six of the most important research centres of Catalonia, has today agreed to nominate Andreu Mas-Colell, Professor of Economics at the Universitat Pompeu Fabra, as president of the board of trustees, an unpaid post. The outgoing president, Rolf Tarrach, is standing down from the position after leading the institute’s first year of promotion, while the vice-president, Jaume Giró, director of the Caixa Foundation, will remain in post. In addition, an agreement has been announced today with the Diputació de Barcelona for BIST to be housed on the Escola Industrial campus, as part of the Diputació’s commitment to transforming this into a research cluster.

Ambition to be a benchmark in international research

The Barcelona Institute of Science and Technology is seeking to increase the high-level cutting-edge scientific impact of its six constituent centres and its international profile by also promoting interdisciplinary research activities. Andreu Mas-Colell, the new president, states: ‘BIST brings together a scientific community of the first order and has enormous potential to strengthen other existing scientific initiatives. What is more, it is in an unbeatable location to attract and train scientists from around the world’.

The outgoing president, Rolf Tarrach, added that: ‘the Barcelona Institute of Science and Technology must continue its efforts to make Catalan research one of the most competitive on the international stage. The leadership of Andreu Mas-Colell, together with that of Montserrat Vendrell, the director of BIST, the team, and the six directors of the constituent centres, will give fresh impetus to its consolidation and help promote the institute’.

The Escola Industrial, a research and knowledge hub

The agreement with the Diputació de Barcelona for the facilities of BIST to be located in the historic buildings of the Escola Industrial will contribute to the future ambitions of this scientific institute, which are in line with the desire of the Diputació de Barcelona and the Generalitat de Catalunya to transform the buildings on carrer Comte d’Urgell into a cutting-edge research centre once the Barcelona School of Engineers moves to the new UPC Besòs-Diagonal campus. BIST will therefore be moving to an area where the Hospital Clínic, IDIBAPS and other research institutions are already located.

Mercè Conesa, President of the Diputació, stated that BIST’s move to the Escola Industrial ‘is one more link in the service change for technical and scientific progress that this building has historically been characterised by’, in addition to representing ‘a new impulse and scaling-up of the Escola Industrial to take on the challenges of the 21st century’.

For his part, Arcadi Navarro, Secretary for Universities and Research, recalled the link this historic place has always had with ‘the industrial, technological and scientific promotion of Catalonia with an international perspective'. A campus, the Escola Industrial, and an institute, BIST, that ‘together are the epitome of our country’s commitment to continue making progress in the knowledge society’.

At the top of European rankings

Since its beginnings in the last quarter of 2015, The Barcelona Institute of Science and Technology has held fifth place in the European research centre rankings – excluding universities – for the number of awards for excellence received from the European Research Council (ERC). The six member centres have received 61 of these since the programme started, more than 1% of the European total.

As regards the list of publications, the centres that make up BIST have published a total of 280 articles from 1st January to 15th June 2016. More than 91% of these articles have been published in the leading journals of their respective subject categories.

The Barcelona Institute of Science and Technology - www.bist.eu

BIST has the support of five large foundations, which are also members of the board of trustees: La Caixa Foundation (Jaume Giró), the Banc Sabadell Foundation (Miquel Molins), the Catalunya-La Pedrera Foundation (Germán Ramón-Cortés), the Cellex Private Foundation (Jordi Segarra) and the FemCat Businesspersons Foundation (David Nogareda). The Generalitat de Catalunya, represented by the councillor Jordi Baiguet, is also on the board.