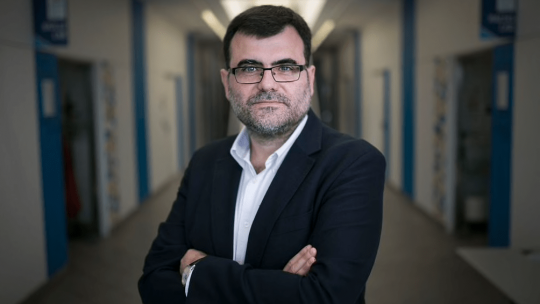 The ICREA researcher at IRB Barcelona obtains €2.5 M to identify residual cells that cause relapse after treatment.

Presented by the European Research Council (ERC), the ERC Advanced Grants are among the most prestigious awards given in Europe and are aimed at established researchers who have made important scientific achievements in the last 10 years of their careers. Eduard Batlle, ICREA researcher, head of the Colorectal Cancer Laboratory at the Institute for Biomedical Research (IRB Barcelona) and a CIBERONC member, has received an ERC Advanced Grant endowed with €2.5M to carry out his project Residual Disease in Colorectal Cancer (ResidualCRC) over the next 5 years.

Colorectal cancer is the third most frequent type of cancer in men and the second most common in women. Treatment usually consists of surgical removal of the primary tumour. However, 40% of patients who undergo this surgery experience relapse: the tumour recurs, usually in another organ, leading to a metastasis. These metastases, which often occur in vital organs, such as the liver or lungs, are the leading cause of death from colon cancer. The ResidualCRC project focuses on those hidden cells of the primary tumour that begin to spread before surgical intervention and that remain undetectable for months or even years, until they give rise to a new tumour. "Despite the clinical relevance of disseminated tumour cells, very little is known about them, and advances in this area would benefit many patients," says Eduard Batlle.

Eduard Batlle has received five ERC grants to date. In 2008, he was given an ERC Starting Grant for excellent young researchers. In 2013, he received his first ERC Advanced Grant, to support his research on colon cancer stem cells. In 2014, his project COLOStage was awarded an ERC Proof of Concept, funding designed to help scientists who already hold an ERC award to test the market potential of their research project. In 2018, he was acknowledged with a second ERC Proof of Concept to develop an organoid biobank that would allow research into the cancer-immune system interaction. He is now receiving a second ERC Advanced Grant to continue research into colon cancer metastasis over the next five years.

"Our laboratory has made great contributions to the field of colorectal cancer, thanks to funding from the ERC," says Batlle. "This new ERC Advanced Grant will allow us to hire personnel (postdocs, laboratory technicians, bioinformaticians ...), state-of-the-art technological services and to cover research lines that will advance our knowledge of colorectal cancer metastasis," he explains.