Epigenetic studies will provide a better understanding of disease 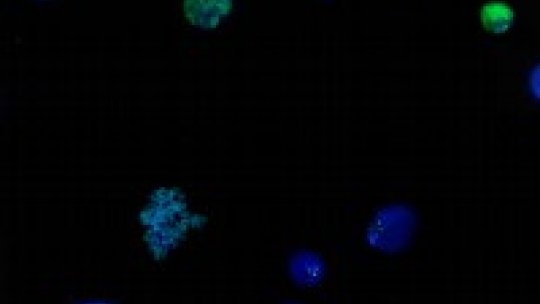 Centromeres (pictured) play a critical role in chromosome segregation and cell proliferation. their function is determined epigenetically by a variation of the histone H3. Image by Olga Moreno, IRB Barcelona

International experts on epigenetics will meet at the upcoming Barcelona BioMed Conference organised by IRB Barcelona and the BBVA Foundation.

From 26-28 March, the Institute for Research in Biomedicine (IRB Barcelona) will bring together 20 internationally recognised scientists from the USA and Europe working in epigenetics to present their latest work. Invited by Ferran Azorín, principal investigator at IRB Barcelona, and Tony Kouzarides, director of the Gurdon Institute in the United Kingdom, these scientists will participate in a new Barcelona BioMed Conference, one of a series organised jointly by IRB Barcelona and the BBVA Foundation. The conference will be held in the Auditorium (Tower D) of the Barcelona Science Park.

Ferran Azorín: "Several epigenetic drugs are now being used to treat some types of leukaemia and breast cancer."

Epigenetics emerged on the scene in the 1990s. Researchers discovered that chromatin, the complex formed by DNA and histones, -proteins that bind strongly to DNA, thereby packaging it in chromosomes-, regulate gene expression. This additional layer of regulatory instructions, which are not held in DNA, comprise the epigenetic code.

Epigenetic differences explain, for example, why two cloned organisms are not the same or why twins develop illnesses of distinct genetic origin. Epigenetic studies promise not only to have a direct impact on health and our understanding of the relations between the environment and genetics but also to provide an explanation of basic aspects of cell biology. The co-organiser of the conference, Ferran Azorín, head of the “Chromatin Structure and Function” group at IRB Barcelona, comments that “deciphering and understanding the epigenome will shed light on fundamental processes in cell physiology. This knowledge will improve our understanding of the development of tumours and other diseases, and may lead to the design of new treatments for these conditions”. A new family of epigenetic drugs, designed to reverse the changes in the epigenome that occur during the development of several kinds of cancer, is currently available. Several of these pharmacological agents are now being used to treat some types of leukaemia and breast cancer.

Background information:
Epigenetics, beyond the genome
Web of the Barcelona BioMed conference: "The regulation of chromatin functions"