Epigenetics, beyond the genome 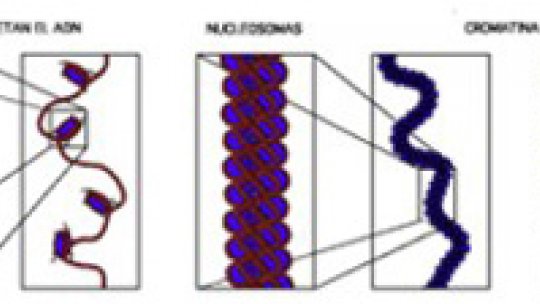 Click on image to enlarge. Image by Richard Wheeler (Zephyris, 2005). Reproduced with permission

Image
Nahia Barberia
Press and Communications Officer
Tel.+34 93 40 37255
nahia.barberia@irbbarcelona.org
The role of chromatin and histones in the regulation of DNA

Since the discovery of the DNA double helix structure, many scientific research efforts have focussed on deciphering the genetic instructions (genes) contained in the genome, their regulation during development and cellular differentiation, and their contribution in the development of disease.

However, an unexpected role has recently been discovered in this process for chromatin. Chromatin is a complex formed by the DNA sequence and histones, proteins that tightly pack DNA into the chromosomes and condition gene expression. The histones “cover the genetic information contained in the DNA and regulate its expression,” explains Ferran Azorín, scientist at the Institute for Research in Biomedicine (IRB Barcelona). Azorín and Tony Kouzarides, director of the Gurdon Institute (United Kingdom), are joint organizers of a Barcelona BioMed conference on chromatin, to be held at IRB Barcelona on March 26-28, 2007, with the collaboration of the BBVA Foundation. (1)

Histones hold the set of instructions by which the chromatin regulates the expression of the genetic information written into the DNA. The epigenetic code can be described as “the regulatory information that is not contained in DNA,” explains Azorín. This extra layer of instructions affects genetic activity without altering the DNA sequence. Consequently, outcomes may vary in spite the fact that the genes are the same.

The best example of this is identical twins, who share the same genes and who, in spite of this genetic similarity, will not always develop the same diseases. If the epigenetic code differs, the same gene can be activated or silenced. Epigenetic information has often been compared to the keynote in which a musical score is played: for the same set of notes, the result varies depending on the keynote. These epigenetic instructions comprise what is known as the epigenome.

Alterations in the epigenome can trigger the development of diseases, like some forms of cancer or Angelman and Rett syndromes. “Deciphering the epigenome will help clarify fundamental aspects of the cellular physiology, thereby enhancing our understanding of the development of these diseases, and possibly leading to new cures,” remarks Azorín. A new family of 'epigenetic' drugs, designed to revert changes in the epigenome that occur during the development of several types of cancer, is now available. Some, like the DNA demethylation compounds and histones deacetylases (HDAC) inhibitors, are already being used to treat some types of leukemias and breast cancers.

The influence of the environment

The epigenome can also provide valuable insight into the influence that environment has on genetic activity. The physical differences observed between identical twins are due mostly to epigenetic factors, explains Azorín. These differences, which may be the result of environmental factors, appear to account for the differing susceptibility of each twin to develop disease. International studies are currently being conducted to determine the role of epigenetics in the development of disease. For example, the Wellcome Trust Sanger Institute, member of the Human Epigenome Project (HEP) consortium (2), has carried out an international study on a cohort of twins who present differences in the development of type 1 diabetes. Their aim is to identify the epigenetic differences that explain why only one of the twins develops the disease (3). Other studies report that the presence of certain micronutrients, like folic acid or vitamin B12, in the diet of pregnant rats provokes epigenetic modifications that alter the expression of specific genes (4).

“Recent years have witnessed a true explosion in this field,” says Azorín. “Scientific magazines publish new results daily”. Expectations are high: epigenetic studies promise not only to have a direct impact on health and on our understanding of the relationship between environmental factors and genetics, but also to provide a better explanation of basic aspects of cell biology.

“Histones,” explains Azorín, “are extraordinarily well preserved proteins and over evolution have conferred upon chromatin some very crucial functions.” They are involved in essential processes during development and cellular differentiation such as, for example, the 'cellular memory' with which the progeny of a cell 'remember' the epigenetic state of essential genes in the stem cell in order to maintain a differentiated state.

Another example of the role of histones is a phenomenon called dosage compensation. In mammals, males have one X-chromosome, while females have two. Females therefore have twice the number of genes found on the X chromosome. Chromatin silences one of the two female X chromosomes throughout the development, and in doing so, compensates for the excess. A similar phenomenon occurs in several insect species, although, in this case, chromatin determines that the X-chromosome of males is twice as active.

The group led by Azorín studies the presence of specific histones in several regions of the chromosome and their role in fundamental cell activities, such as chromosome segregation during the cell division (5). “During cell division, the correct segregation of chromosomes among daughter cells depends mostly on a particular chromosomal structure, called the centromere,” he explains. The DNA sequence is not preserved in centromeres and differs significantly between species – even among chromosomes of the same species.

“Chromatin is the fundamental element of the centromere” explains Azorín. “The centromere contains a specific histone not found in the rest of the chromosome. This characteristic has been preserved during evolution, from yeasts to humans.” But what is the function of this histone? “We know that it’s crucial for the centromere, but we don’t know exactly how it works yet.” They have observed, however, that when the histone is located in other parts of the chromosome it is quickly degraded. This degradation mechanism ensures that this histone occurs exclusively in the centromere.

In spite of breakthroughs in recent years, “we are still far from knowing everything that the epigenetic code implies” observes Azorín. “We learned of the regulatory role of chromatin and histones only ten years ago. Much work remains to be done.”

“For example, when new genes are introduced into the DNA of a cell,” explains Azorín, “they usually fit themselves almost randomly into any region of the genome and, very frequently, end up silencing themselves. This is because they lack chromatin, or 'epigenetic' environment, which usually accompanies them.” This observation poses a challenge for gene therapies that seek to rectify the absence of specific genes or their incorrect functioning through the introduction of functional copies of the same genes. On the other hand, the generation and use of stem cells also requires the capacity to erase 'old' epigenetic instructions and to print 'new' instructions, in an efficient and controlled way.

Link to the Press Release