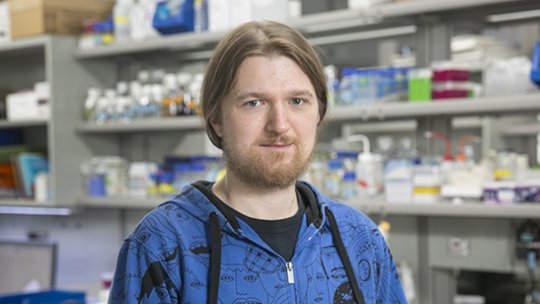 Since 2017, the Croatian researcher has been leading a team of 10 scientists in the Genome Data Science lab.

At the beginning of November, Fran Supek (Born Zagreb, 1981), a computational biologist and group leader of IRB Barcelona’s Genome Data Science lab, was one of the 10 scientists in the last call to be appointed an ICREA Research Professor.

ICREA, which stands for Institució Catalana de Recerca i Estudis Avançats, is a foundation of the Catalan Government that has coordinated the ICREA Talent Recruitment and Retention Programme since 2011 and has become a key contributor to the success of the research system in Catalonia.

ICREA offers permanent contracts to scientists from all over the world who wish to undertake their research in Catalonia. There are currently 270 ICREA researchers working in 50 organisations in Catalonia, mainly in universities and research centres, such as IRB Barcelona. With the appointment of Supek, there are now 14 ICREA researchers working on projects at IRB Barcelona.

In the Genome Data Science lab, Supek works on the biology of DNA mutations from a computational standpoint. To this end, the team uses the most cutting-edge big data analytical techniques and machine-learning methodologies to study the genomic data of human cancer samples and the genomes of microbes and microbiomes.

At the end of 2017, Supek was also awarded an ERC Starting Grant (link to news) to perform five-year study of hypermutated tumours and to advance personalized cancer treatment.

Fran Supek holds a BSc in Molecular Biology and a PhD from the faculty of Sciences and Mathematics of the University of Zagreb (Croacia). In 2010, he came to Barcelona, where he joined the EMBL/CRG Systems Biology Research Unit at the Centre for Genomic Regulation as a postdoctoral fellow. There, he worked in the “Systems Genetics” lab, headed by Ben Lehner, addressing the genomes of human tumours. In April 2017, he joined IRB Barcelona to set up the Genome Data Science lab, which comprises a highly interdisciplinary team capable of tackling cancer genomics from a unique perspective.