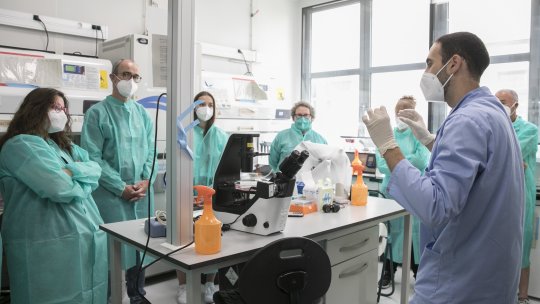 The pandemic has challenged society on many fronts, but it has also provided an opportunity to innovate. And this is precisely what IRB Barcelona has done for its hallmark annual public outreach event. With a presential Open Day out of the question, this year IRB Barcelona designed a semi-presential experience spanning a whole week (8-12 June).

Members of the public were invited to come and explore our labs in small groups (to comply with the restrictions in place) but also had the opportunity to get a taste of life at IRB Barcelona through a virtual tour, allowing them to peak into the heart and soul of our research activity.

Aware that many members of the general public feel out of their depth with “science” (indeed science talk is full of complicated words and difficult concepts, and for many it is an alien world), IRB Barcelona is committed to engaging with the public, to explaining the relevance of its research lines and to getting audiences onboard by supporting our work. Once again, this commitment has been fully reflected by the 2021 IRB Barcelona Open Week.

The diverse activities available during the Open Week were all geared towards these goals.  The online “science snacks” given by some of our PhD students and research associates provided a glimpse of the research lines developed. Some of the topics included how organoids—3D cell cultures—are used to tackle questions in colon cancer, the involvement of so-called “zombie cells” in various diseases such as fibrosis and cancer and also ageing, research efforts into rare diseases such as aminoacidurias, and drug design to tackle proteins associated with heart disease. Those watching also dicovered that the tiny fruit fly Drosophila, used in many of our research projects, shares 60% of its genes with humans!

A 360º virtual tour allowed people to enter labs and discover the work done there. They were able to see the recently launched Drug Screening Platform and the cutting-edge technology used by the Institute, while various group leaders explained their work and the relevance of their research efforts. Although the virtual tour was set up for the Open Week, it will now be permanently available on IRB Barcelona’s website, thus allowing anyone interested to come inside. The tour challenges watchers to find a hidden message and there is a draw to win a personalised onsite visit to the institute. If you want to try to find it, start the tour here!

The evening of Thursday 10 June saw an event in a different format, namely a Round Table, focussed on breast cancer and chaired by the journalist Lídia Heredia, and involving scientist Dr. Roger Gomis, medical doctor Dr. Aleix Prat and patient Anna Giannoni. The session could be followed presentially but was also streamed on the IRB Barcelona YouTube channel.

This year’s innovative hybrid event was possible thanks to the enthusiasm and time devotion of many PhD students, post-docs, research faculty and administrative staff.

Moreover, this important outreach endeavour would not have been possible without the support of the Fundación Española para la Ciencia y la Tecnología (FECYT) and the Barcelona City Council.

IRB Barcelona very much looks forward to being able to open its “real” doors to the public in 2022.