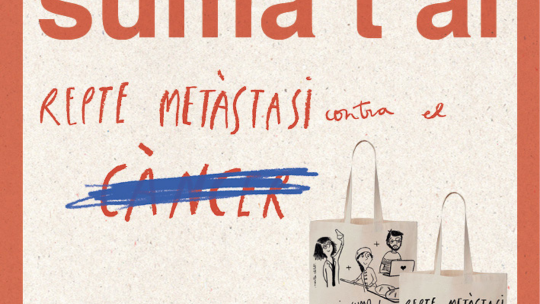 A year ago, the bakeries in Barcelona and Catalonia put tote bags on sale to raise money for metastasis research.

Designed by the illustrator Montse Clotet, the fundraising bag can be purchased at IRB Barcelona´s online store.

In December 2020, the illustrator Montse Clotet, a partner of IRB Barcelona's Metastasis Challenge, launched a fundraising campaign with the Barcelona Bakers' Guild, Empresàries Flequeres (Association of Women Bakers), Panàtics, and other professionals in the sector. For €6, customers of the bakeries that joined the initiative could purchase a fundraising tote bag, designed by the same illustrator, and thus support metastasis research conducted at IRB Barcelona.

One year later, 1,253 bags have been sold, raising a total of €7,518. These funds can now be used to purchase essential materials and reagents (such as antibodies) to advance research or can go towards the acquisition of laboratory equipment.

The initiative of the bakeries stirred media interest, including the BTV programme "Bàsics", which invited Montse Clotet and Margarida Corominas, managing director of IRB Barcelona, to talk about the campaign.

“We're very grateful to Montse, to all the bakeries that have joined the campaign, as well as to the Barcelona Bakers' Guild and the other organisations that have supported us. It's essential to get the whole of society on board in the fight against metastasis, and it's through initiatives like this one that we'll achieve this,” said Margarida Corominas.

“By organising activities like this one, we're supporting more and better research into cancer and metastasis. On the one hand, we provide direct resources for cancer research and its treatment, but we also give visibility to the Metastasis Challenge (or similar initiatives). This visibility can encourage other people or organisations to devise fundraising activities and put pressure on public authorities to understand that this is an issue that should be prioritised on the public agenda and, as such, resources should be allocated accordingly,” explained Montse Clotet.

On how the idea of the tote bag came about, Montse Clotet says, “When I was thinking about the idea of a bag and how to reach as many people as possible, I spoke to my friend Anna Elias, from the Elias Bakery. She immediately realised that we could encourage other bakeries, the Barcelona Bakers' Guild and Empresàries Flequeres to make this initiative bigger and reach the maximum number of people. These people, in turn, would walk about with the bag, making the Challenge more known and giving it the visibility we were talking about. And the response of the Barcelona Bakers´ Guild, Empresàries Flequeres, and bakeries was incredible. I am so grateful to them.”

The tote bag is no longer available in the bakeries but can be purchased at IRB Barcelona's online store.

The  €7,500 collected in this campaign will be added to the more than €2.2 M that the Metastasis Challenge has raised to tackle cancer, the second leading cause of death worldwide. Although cancer research has advanced greatly in recent decades, it has focused mainly on the primary tumour.

Metastasis—the spread of cancer to different organs— is responsible for 90% of cancer deaths, and treatments for primary tumours do not stop it. This is why IRB Barcelona, through the Metastasis Challenge, wants to engage the whole of society in promoting research into metastasis, which is key in the fight against cancer.