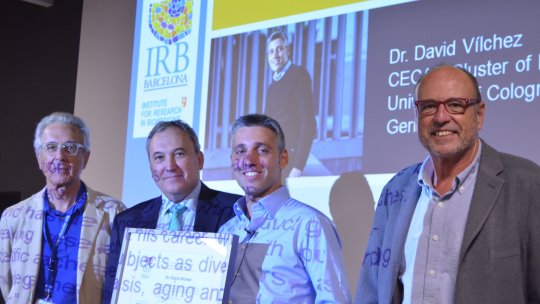 Vilchez obtained his PhD from IRB Barcelona in 2008, and three years ago he began his own group in Germany, where he has been awarded an ERC Starting Grant.

Applications for the 2017 IRB Barcelona “Alumni of Excellence Award” will be accepted in autumn.

Today IRB Barcelona has presented David Vilchez (Mataró, Barcelona, ​​1978), group leader at the CECAD-Cluster of Excellence in Cologne, Germany, with a commemorative certificate naming him as the first winner of the Alumni of Excellence Award. To mark this occasion, Vilchez has been invited to IRB Barcelona, where he will give a seminar entitled "Mimicking proteostasis of immortal stem cells in a troubled soma to extend organismal healthspan".

The jury, which is formed by IRB Barcelona group leaders working in various research fields, valued "Vilchez’s great capacity to perform cutting-edge research throughout his career and his notable contributions to the fields of neurodegeneration, proteostasis, ageing and stem cell biology". The jury also highlighted his commitment to science communication—both to specialised audiences and the general public.

David Vilchez has expressed that he is “very pleased and proud” to receive the first of these awards. “It is good to know that IRB Barcelona follows us after we leave its employment.”  David has praised the initiative of the Alumni network, which was launched in October 2015–and through which this award is granted—, referring to it as “an excellent system through which to maintain contact, build a community and help each other".

The 1st Alumni of Excellence Award has been sponsored by Eppendorf.

More information: News article on the award of the prize to David Vilchez (January 2016)