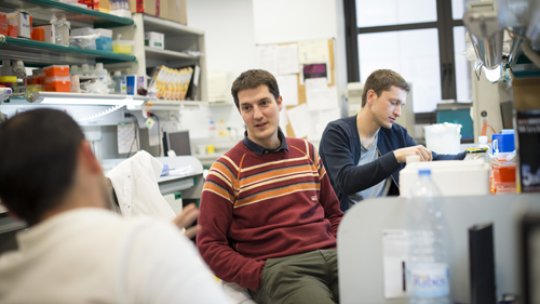 The Spanish Association of Cancer Research recognizes his work and grants him the ASEICA Young Investigator Award 2018.

The award ceremony will be held in Valencia on 6, 7 and 8 November.

The Spanish Association for Research on Cancer (ASEICA) has announced the winners of the 2018 ASEICA Awards, among them Roger Gomis, head of the Growth Control and Metastasis  lab at IRB Barcelona, who has received the Young Investigator Award in acknowledgement of his work on cancer.

ICREA researcher Roger Gomis leads a multidisciplinary lab devoted to metastasis research at IRB Barcelona. His work focuses on the identification and functional validation of the mechanisms that allow breast and colon cancer to metastasize to clinically relevant sites, and he has published various important articles in recent years.

“These awards aim to acknowledge the magnificent work that Spanish scientists are doing in spite of insufficient resources in the country,” said Carlos Camps, president of ASEICA.

The projects of the awardees will be presented in Valencia on 6,7 and 8 November in a gathering that will serve to disseminate advances in cancer research, present the most recent studies in the field, and showcase the work being undertaken on different types of tumour.

If you want to know more about the research that Roger Gomis lab does, you can watch the Meet Our Scientists Video "Light and credibility": https://www.youtube.com/watch?v