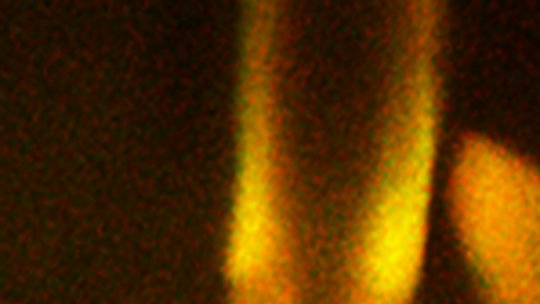 The bristle is a mechano-sensory organ that houses the cilium projected by a neuron. Two structures found at the base of each cilium, centriole, and transition zone, can be seen in green and red, respectively (Gonzalez Lab)

The study, published in Current Biology, focuses on cilia, the cellular structures that by sensing chemicals and mechanical forces allow for smelling, hearing, and many other essential functions.

The group led by ICREA Research Professor Cayetano Gonzalez at IRB Barcelona, in collaboration with the group of Professor Giuliano Callaini from the University of Siena in Italy, has published a new study in Current Biology that contributes to understanding how cilia are assembled.

Many cells in our bodies present a small structure that looks like, and as a matter of fact works as an antenna, conveying to the cell information on the extracellular environment. They are called cilia (plural) or cilium (singular). Ciliated cells play essential functions in the human body. Thus, for instance, the monitoring of fluid flow in the kidney, the detection of hormones in the brain, or the senses of hearing and smell depend on specialised neurons equipped with chemo-sensory or mechano-sensory cilia. Moreover, besides sensing, beating cilia keep fluids in motion in many parts of our bodies and are critical for human health.

A cilium can be regarded as a long and thin protrusion of the cell membrane that contains microtubules. Ciliary microtubules are arranged in a typical radial symmetry that is conserved through evolution and is templated by a small organelle that sits at the base of the cilium, known as basal body. Most animal cells contain two basal body-like structures (centrioles), but only one of them can actually work as basal body. In human cells, this is always the centriole that is said to be the "mother" because it was assembled earlier than the other, called the "daughter" centriole.

One laboratory animal model used to investigate how cilia are assembled is the vinegar fly Drosophila melanogaster. The article by the Gonzalez's group shows that in Drosophila, as in humans, basal body fate is also reserved to the mother centriole. Moreover, through genetic manipulations that are easily performed in flies, they have been able to get a glimpse into the molecular mechanism that governs this fundamental process.

They have found that removal of the daughter-centriole specific protein Centrobin (CNB) allows daughter centrioles to serve as basal bodies. Thus CNB-depleted neurons present two cilia, the standard, which is templated by the mother centriole and a second one templated by the daughter centriole from which CNB has been removed. Conversely, mother centrioles engineered to carry CNB cannot function as basal bodies and, therefore, neurons modified this way cannot assemble cilia.

In humans, the lack of cilia, or cilia that do not work well, are the cause of a long list of disorders, known as ciliopathies, which include polydactyly, obesity, respiratory dysfunction, hearing impairment, and many others. Basic research in model organisms like the vinegar fly is helping to understand the molecular details of cilium assembly, thus paving the way to applied research in this field.