More than 5,000 applications received to participate in the NEUBIAS Academy’s online training courses on bioimage analysis 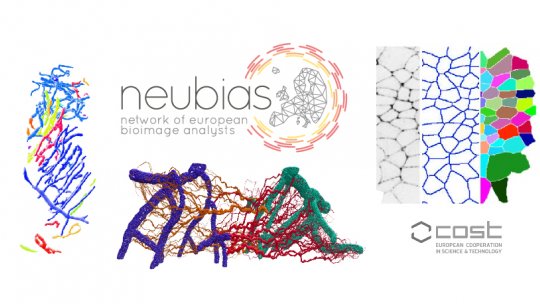 Barcelona, 27 April 2020.- More than 5,000 people have applied to participate in the different training sessions on biological image analysis offered by the NEUBIAS network.

Imaging is a recognised key technique for research purposes. In this context, the NEUBIAS project—which has been coordinated by IRB Barcelona since 2016—gains relevance. NEUBIAS involves the setting up of the largest network of bioimage analysts in Europe, whose members collaborate to strengthen the bridge between life sciences, computer science and digital image processing.

The NEUBIAS project, which was scheduled to end its activity this April, has been extended until October. It has adapted to the limitations imposed by COVID-19 and has now started to offer its training activities online, generating considerable interest.

Julien Colombelli, head of the Advanced Digital Microscopy platform at IRB Barcelona and coordinator of the project, says, “COVID-19 has forced us to change the way we approach our work, but we are very satisfied with the interest generated by our training activities. We have received more than a thousand applications, so we will continue to organise webinars regularly in the coming weeks to respond to the need to expand knowledge in the field of bioimage analysis."

These training activities fall within the framework of the NEUBIAS Academy. Created as a spin-off of the NEUBIAS network, this initiative aims to provide sustainable bioimaging analysis training material for the scientific community. The Academy thus capitalizes on the activity of NEUBIAS, in which 415 people from 54 countries have participated. Indeed, more than 900 people have followed one of the 15 training sessions held in 7 countries to date, and the members of NEUBIAS hope that this activity will continue over the coming years.

The network is highly active through its seven working groups. To date, fifty meetings have been organised to allow researchers in the first years of their degrees and technology technological platforms managers to carry out image analysis work alongside experts. Likewise, two books have been published and the first online repository has been set up, collecting more than 1,200 resources for bioimage analysis.

Collaboration between the experts who form part of the network has also led to the development of BIAFLOWS. Led by Sébastien Tosi, a researcher and analyst with the Advanced Digital Microscopy Facility at IRB Barcelona, BIAFLOWS is the first application intended to compare the most used workflows and solve common and advanced problems encountered in image analysis.

NEUBIAS is coordinated by Julien Colombelli, head of the Advanced Digital Microscopy Facility at IRB Barcelona, and is supported by funding from the European Union through a COST Action (CA15124) (European Cooperation in Science and Technology). The network is made up of more than 250 members from 42 countries who work to share knowledge and techniques related to bioimage analysis, as well as to improve image analysis technology, thereby promoting collaboration and innovation in this field.

Collaboration is the key in bioimaging—a field that involves the following four professional profiles: biologists, who seek answers through scientific experiments; microscopists, who develop optical systems; developers, who design image processing algorithms and computer programs; and bioimaging analysts, who select appropriate imaging algorithms and their applications, and assemble them for practical bioimaging analyses.

One of NEUBIAS’ objectives is to provide an answer to the question regarding the role played by bioimaging analysts in the scientific community.

“In a recent survey of nearly 2,000 researchers, six out of ten participants indicated that among the three main components of image-based experiments, namely conducting the experiment, microscopy, and image analysis, the latter is the most difficult part. So we consider bioimage analysts to be key players in overcoming this difficulty,” explains Colombelli, the NEUBIAS coordinator.

All the contents of the network and information on upcoming training sessions are available on the project’s official webpage: http://neubias.org/.