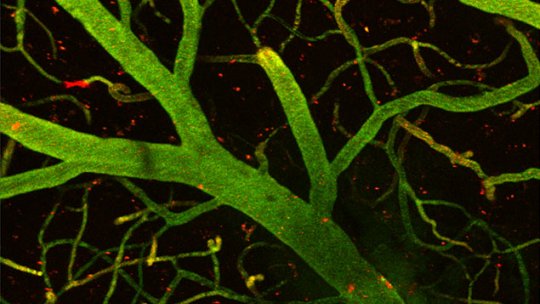 Detail of one millimeter of a mouse brain. In green, capillaries that form part of the blood-brain barrier; in red, molecules attached to the shuttle patented by IRB Barcelona have managed to cross the barrier and reach the brain. (B Oller, IRB)

It has been known for 100 years that the brain is protected by thousands of tight capillaries that form a barrier—a defence mechanism but also an obstacle to the use of promising drugs to treat diseases affecting the central nervous system.

Ernest Giralt: “This barrier is responsible for the low success rate of new drugs to enter the brain. We now have the strategies to overcome it.”

20 pioneering scientists present their latest research on the barrier and the breakthroughs in therapeutic shuttle transporters that target the brain in the Blood-Brain-Barrier Conference, an event organised by IRB Barcelona and supported by the BBVA Foundation.

One of the latest results is a shuttle based on bee venom developed at IRB Barcelona.

Alzheimer’s disease, brain tumours, schizophrenia, strokes, epilepsy, dementia, various kinds of ataxia...A great many diseases affect the central nervous system, and their treatment calls for drugs that target the brain. A complete understanding of the biology of the compact blood-brain barrier protecting this organ, which “is formed by so many capillaries that if they were to be placed end to end they would stretch 600 kilometers”, and the search for new approaches to overcome this obstacle are among the most promising strategies to find new treatments using drugs that have therapeutic potential but that are unable to cross this barrier unaided. “We have advanced enough to start the first clinical trials with shuttles that can cross this barrier, a biological structure responsible for the low success rates of new treatments,” explains Ernest Giralt, from the Institute for Research in Biomedicine (IRB Barcelona) and one of few experts in shuttle research.

Ernest Giralt, who is also a Senior Professor at the University of Barcelona, together with the Japanese scientists Tetsuya Terasaki, from the University of Tohoku, is co-organising  the Barcelona Biomed Conference entitled “Blood-Brain-Barrier”, an initiative of IRB Barcelona that is supported by the BBVA Foundation. A select group of 20 experts in medicinal chemistry, basic biology, and medicine from universities, research centres, hospitals and biotech companies will share breakthroughs and knowledge in this field with 150 attendees. The conference starts today at the Institut d’Estudis Catalans in Barcelona and ends on Wednesday 4th November.

The concept of shuttle transporters to overcome the blood-brain barrier was first introduced in 1986 by the North American William M. Pardridge, from the University of California, Los Angeles (UCLA). Five years later, the feasibility of antibodies, like the ones used by the immune system, to cross the barrier was demonstrated experimentally. Pardridge will give the plenary lecture entitled “Biologics drug delivery to brain with blood-brain-barrier molecular Trojan Horses”.

The strategy of using antibodies as shuttles was developed from the advances made by Pardridge and published in an article in Neuron in 2014, which described an application for an immunotherapy-based treatment for Alzheimer’s disease. This particular approach, based on a fragment of antibody (which serves as the shuttle) coupled to another antibody (which is the therapeutic agent) is being developed by the pharmaceutical company Roche.

Another strategic shuttle line was put forward at the beginning of the XXI century. This approach involves peptides, the smallest proteins and least expensive for the generation of antibodies. In 2005, Giralt,  an expert on peptide chemistry, launched this line of research at IRB Barcelona and has now started to generate the first peptide shuttles able to cross the barrier.

The most recent approach is a peptide based on apamin, a protein extracted from bee venom. Once the toxicity has been removed from this molecule, the peptide is still able to cross the barrier and has a long life in blood. This result appeared in the journal Angewandte Chemie in October. In addition to this shuttle peptide, Giralt’s lab has achieved two more based on other strategic chemistries.

Another prominent scientist at the conference is the physician Jaume Mora, from the Sant Joan de Déu Hospital in Barcelona. Dr. Mora is an expert in a kind of incurable paediatric brain cancer. His lab and that of Prof. Giralt have started a collaborative project to couple an anti-tumor therapy to shuttle peptides. This shuttle, which involves the two scientists and other European partners, has just received funding from EuroNanoMed-II programme, which is run by the European Union.

“The traditional way of identifying small molecules capable of crossing the barrier has been exhausted, and the Trojan horse strategy is now giving promising results and opens up therapeutic opportunities for the treatment of brain diseases,” concludes Giralt.

The full programme for the Barcelona Biomed Conference “Blood-Brain-Barrier” can be consulted here.