Scientists disclose the mechanism of action of solnatide, a possible treatment for pulmonary edema 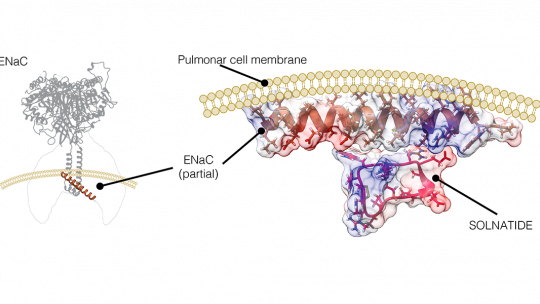 Proposed interaction of Solnatide with the ENaC Sodium channel.

Solnatide is a synthetic peptide that is currently undergoing clinical trials for the treatment of life-threatening lung failure in patients with Acute Respiratory Distress Syndrome and COVID-19.

In this study, the researchers detail the structure of solnatide and propose a mechanism of action with cellular sodium channels ENaC that is related to the volume of liquid in the cellular environment.

The work has been published in the journal Computational and Structural Biotechnology Journal.

Pulmonary permeability edema is a life-threatening accumulation of fluid in the lungs. It causes lack of oxygenation of the blood and occurs in patients with Acute Respiratory Distress Syndrome (ARDS) and COVID-19. This accumulation of liquid is linked to defects in the functioning of the epithelial sodium channels responsible for regulating water levels inside and outside cells.

Collaborative work led by Dr. Maria Macias, ICREA researcher and head of the Structural Characterization of Macromolecular Assemblies lab at IRB Barcelona, and Dr. Susan Tzotzos, from the Austrian biotech APEPTICO, has revealed the structure of solnatide, a molecule that is being tested for the interventional treatment of pulmonary permeability edema. In this regard, this work has allowed the scientists to detail the mechanism of action of solnatide and its interaction with the cellular sodium channel ENaC, which is responsible for the removal of pulmonary liquid.

The Vienna company APEPTICO, the proprietary owner of solnatide, has been studying the biological function of this molecule for many years. Solnatide is currently being tested in clinical trials for the treatment of patients with moderate to severe ARDS as well COVID-19.

“Our work has focused on describing the structure of the peptide and proposing a mechanism of action to pave the way for possible improvements to its sequence, that is to say, small modifications that can make it more effective,” says Dr. Macias.

A helix and a dipole

The structure of the cellular sodium channel had already been partially described. However, the details were lacking for a remaining less structured region that was not yet known. In this study, which has been published in the journal Computational and Structural Biotechnology Journal, the researchers have used structure prediction tools, including Alphafold2, to identify a helical region aligned with the cell membrane on the side of the cytoplasm. This helix would have a region with a positive charge and one with a negative charge.

Also, solnatide has a region called a dipole, with a negative and a positive charge. Thus, the researchers were able to predict that this would be the point of interaction between the two structures and how they would be positioned for such an interaction.

Researchers from the Catalan biotech BCN Peptides in Barcelona, and the Medical College of Georgia at Augusta University and Emory University School of Medicine, in Atlanta, both in the US, have also collaborated in the work.