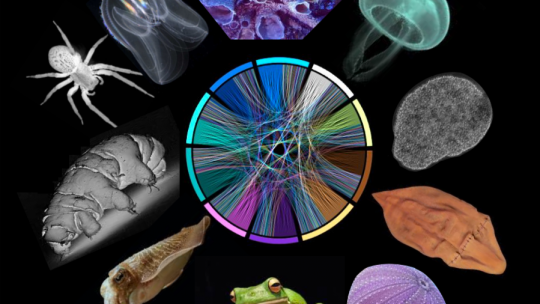 The study infers the genetic changes that coincided with the appearance of different groups of animals and their main traits.

Researchers at IRB Barcelona and BSC-CNS have confirmed that the dynamics of genomic evolution, in addition to the presence or absence of the genes themselves, determines diversity in the animal kingdom.

Published in Nature Ecology and Evolution, the study has been based for the first time on the genomic data of all the large groups of animals.

Elephants, ants and jelly fish are all animals. Within the animal kingdom, we find numerous forms and lifestyles. How has this great diversity come about? Scientists at the Institute for Research in Biomedicine (IRB Barcelona) and the Barcelona Supercomputing Center - Centro Nacional de Supercomputación (BSC-CNS) have correlated the genetic changes that coincided with the appearance of different groups of animals and their main traits.

Published in Nature Ecology and Evolution and authored by Toni Gabaldón, ICREA researcher and head of the Comparative Genomics Lab, and Rosa Fernández, postdoctoral fellow in the same group (both previously at the Centre for Genomic Regulation (CRG)), this study involved a global analysis of the evolution of DNA, starting for the first time from genomic data of all the phyla or major groups of animals; more than 230 genomes in total.

The novelty of this work lies in the fact that it reconstructs the phylogenetics or genealogy of each of the genes, rather than comparing the genes of each species, which is what has been done until now. That is to say, the researchers have been able to predict which genes were gained, lost or duplicated and when. This approach goes beyond merely knowing which genes are present or absent in a certain animal group as it provides a picture of the dynamics of this evolutionary process.

The main conclusion drawn by the study is that diversity in the animal kingdom is not attributable exclusively to the presence and absence of certain genes but also to how the loss or gain of genetic information has arisen and at what point of evolution.

“The ingredients to make biscuits or cakes are the same: flour, butter, milk, eggs and sugar. But the amounts and the order in which we add them and how we use them in each recipe varies in each case. In the molecular studies on animal diversity performed to date, we had discovered the “ingredients”, that is to say, the genes. Now we want to understand not only whether a new gene appeared or whether a gene was duplicated or lost, but when and how often these changes occurred,” explains Gabaldón.

“The most remarkable results have been finding two large waves of gene gain associated with duplications in gene families,” says Fernández. “The first great gain of genes is ancient and it occurred before the appearance of animals, while the second occurred recently and in parallel in each of the major groups of animals. These recent and specific waves of change in each group are correlated with particular morphological and physiological innovations of each group,” she goes on to say.

Among the gene families that have undergone the most changes through duplications and loss of genetic material are those involved in the nervous system, thereby indicating the evolutionary plasticity of this system, which probably played a key role in animal adaptation to distinct environments and lifestyles. Specifically, and in comparison with other animals, in vertebrates the duplication of genes linked to neuronal function is high—an observation attributed to the complexity of their nervous systems.

“Knowledge of the molecular bases—determined to a great extent by genes—that give rise to the immense diversity within the animal kingdom and how they have evolved will allow us to better understand the origin and development of complex traits, and even better select model organisms with which to study processes of interest in humans,” concludes Gabaldón.

The research has received funding from the Spanish Ministry of Science, Innovation and Universities, the European Development Fund (ERDF), the Agency for Management of University and Research Grants (AGAUR), the Catalan Government through its CERCA Programme, EMBL, and a Severo Ochoa Centre of Excellence Award 2013-2017. The study has also received funding from the European Union’s Horizon 2020 (H2020) Programme through a Marie Curie grant awarded to Rosa Fernández and a Consolidator grant from the European Research Council (ERC) awarded to Toni Gabaldón.

Gene gain and loss across the Metazoa Tree of Life