Technology can now extend the album of 3D “photos” of membrane proteins, which currently covers 3% of these molecules 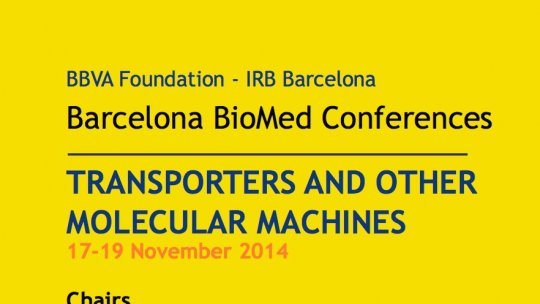 30% of human proteins exert their function in cell membranes and more than 50% act on these proteins.

New high-resolution microscopes and 3D calculation programmes are crucial to increase the number of atomic structures available, which currently stands at 440, this figure representing 3% of the estimated 15,000 that exist.

Today sees the start of a three-day conference in Barcelona involving 150 international scientists invited by the BBVA Foundation and IRB Barcelona.

All our cells have membranes that separate the cell content from the external environment. Thirty percent of human proteins exert their action in these and other cell membranes. These molecules include transporters, receptors, channels and other protein machinery, which have diverse functions at the cell membrane: transport, reception and transmission of signals, and channel opening to allow the passage and exchange of substances.

“The therapeutic potential of these kinds of protein is enormous, and there is great interest on the part of the biomedical community and industry to unravel how they work at the molecular level; the atomic structure of only a small percentage of these proteins is known but this scenario is now changing,” explains Manuel Palacín, one of the few experts in Spain working on the atomic structure of these kinds of molecule. “Without high resolution structural information on these molecular machines, knowledge about their biological function, interactions with other proteins, and drug development comes about slowly and inefficiently,” says the IRB Barcelona researcher.

More than 50% of current drugs target membrane proteins, above all signal receptors for the treatment of cancer and many other diseases. “Like all proteins, those at the membrane are also susceptible to being the origin of disease or the pathological mechanism of many conditions.” In 1994, Manuel Palacín’s team discovered one of the first molecular bases of a disease, namely cystinuria, caused by mutations in a transporter. This disease has an incidence of one case in every 7,000 births. “We are on the way to revealing the atomic structures of this family of membrane proteins, and this will allow us to search for drugs to interfere with diseases associated with these transporters,” states Palacín.

Around 5,000 genes code for membrane proteins—a number that represents approximately a third of the human genome. “The difficulties encountered to reveal their atomic structures are caused by their location, which has hampered their production, crystallization and study at atomic resolution. The unrelenting work of some groups worldwide has allowed the consolidation of the study method, and key technological developments in ultra cryo-electron microscopy promise a good rhythm of progress,” assures this experts.

In 1985 the first structure was discovered; in 2008 the scientific community increased the album to 100 structures and today the data base holds 440. “There have been periods in recent years in which every issue of the journal Nature carried an article on the structure of a membrane protein, and the growth in knowledge is now exponential,” explains Palacín.

From Monday to Wednesday, this revolution, the advance in our knowledge of membrane proteins, and the consequences for pharmacology will be the topics addressed by more than 150 international experts brought together at the “Institut d’Estudis Catalans de Barcelona” in an event co-organized by Sir John Walker, from the University of Cambridge, and Manuel Palacín and Miquel Coll, from IRB Barcelona. Entitled “Transporters and other molecular machines”, this event is the 25th Barcelona Biomed Conference, an activity organized by the BBVA Foundation.