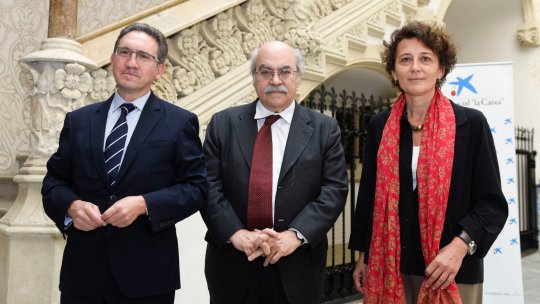 Today at the Obra Social La Caixa’s Palau Macaya, Jaume Giró, CEO of La Caixa Banking Foundation and Vice-President of the Barcelona Institute of Science and Technology (BIST), Andreu Mas-Colell, President of BIST, and Montserrat Vendrell, CEO of BIST, present some of the areas of research that BIST aims to promote over the next few years.

The Barcelona Institute of Science and Technology is a scientific initiative of six of Catalonia’s research centres of excellence whose objective is to increase their levels of collaboration in order to put together a joint scientific project. Its strength is based on the potential research capacities of the six centres and is supported by, among others, La Caixa Banking Foundation, to promote multidisciplinary, cutting-edge projects.

Jaume Giró, CEO of La Caixa Banking Foundation and Vice-President of BIST, states: ‘The promotion of research projects that herald the science of the future is one of the priorities of Obra Social La Caixa. We have been supporting these kinds of initiatives for more than twenty years, because we are convinced that they are the engine for society’s social and economic progress. The collaboration between the six centres of excellence that make up BIST is the key to their becoming international benchmark organisations for the science of the future’.

Andreu Mas-Colell, President of the Barcelona Institute of Science and Technology, says: ‘BIST brings together top international scientists in their fields. We aim to use this as a base to build a joint multidisciplinary project that will, within about ten years, enable BIST to position itself among international benchmark institutions, whilst still retaining the individual character of each centre.

The multidisciplinary approach in science is key

The challenges we face as a society today are complex and multifaceted. The specialisation that scientific progress requires contrasts with the need to seek cross-cutting themes, from genomics to photonics, from nanotechnology to chemical biology. The scientific project BIST is aiming to construct is based on the search for these complementary and interdisciplinary themes, not only to promote the creation of innovative projects, but also to provide the most competitive environment for the training of scientists.

Big data, chemical biology, super-resolution microscopy and graphene are just four examples of the multidisciplinary initiatives that BIST will be promoting over the next few years.

According to Montserrat Vendrell, CEO of BIST, ‘strengthening the interaction between different areas of knowledge is the keystone for any research institute and requires an environment that stimulates such collaborative work. Specialisation has to coexist with a multidisciplinary approach if innovative projects are to be promoted and the scientists that society requires from us are to be trained’.

Some of the lines of research that BIST aims to promote

An opportunity in the field of big data

A requirement that scientists in different fields have in common is the analysis of data to obtain knowledge. Using a combination of data from various sources, researchers can analyse and make predictions about the future of a system. The increasing amounts of data available to them give rise to the challenge of finding ways of using new IT tools to help them work efficiently.

Data analysis platforms and programming language codes and specialised knowledge are essential if solutions to the growing needs of scientific analysis are to be found. BIST is in an excellent position to develop IT platforms to manage big data, incorporating new technological developments quickly and effectively. In the short term, the Scientific Information Port (PIC), operated by the Institute for High Energy Physics (IFAE), is placing its experience in the management of scientific data at the disposal of the BIST centres; the strong collaboration that already exists between the BIST centres and the BSC (Barcelona Supercomputing Center) will also play a key role.

Obtaining information on materials and biological entities at a nanometric and molecular level is of great importance in current cutting-edge research (on the frontiers of the knowledge that we have at our disposal).

Much of the knowledge we already have about biological, chemical and physical processes is due to our ability to visualise them at their origin, including observation at cellular, molecular, atomic or quantum level. Microscopy has enabled us to see different structures, organs, tissue, cells, molecules and even individual atoms, but conventional techniques do not provide a resolution which permits the visualisation of sub-cellular structures in vivo, or the access to electronic, optical, or chemical properties of nanometric structures in situ.

In recent years, extremely powerful optical techniques have been developed that permit observation at unprecedented levels of resolution. For example, it is now possible for the first time to visualise, in vivo, processes that are crucially important to study the origin of diseases on a sub-cellular or molecular scale and to make possible the understanding of the relationship between the structure and physical or chemical properties of molecules and materials.

The BIST institutes have at their disposal world leading technologies in these areas. However, in the case of electronic microscopy, in which technology is developing very rapidly, we need to make technological progress to be fully competitive. We have identified as strategic the promotion of a collaborative programme that includes technological development and the applications common to biology, nanomedicine and materials of super-resolution optical microscopy and electronic microscopy.

Graphene is one of the important focuses of attention for the research and industrial community worldwide. There is no finer or more lightweight material and its resistance, flexibility and conductive properties are second to none; we are only just beginning to see its possibilities in fields such as technology, medicine and energy.

BIST aims to approach the applications of graphene and 2D materials (materials consisting of a single layer of atoms) in an interdisciplinary manner. BIST has researchers who are international leaders in these materials and who work in fields as diverse as photonics, spintronics and biomedical devices. Barcelona could become a benchmark location in the race to bring applications based on these materials to the market.

A tool for translational research

The journal Natural Chemical Biology defines Chemical Biology as a field that combines the scientific ideas and tools of chemistry, biology and other disciplines to understand and manipulate biological systems with molecular precision. BIST aims to promote an area of work focusing on Chemical Biology (ChemBio), the objective of which is to study and understand biological problems by applying the techniques and tools of chemistry. This area of work will be open to interaction and collaboration with groups from other disciplines, such as geneticists, molecular biologists, biochemists, systems biologists and synthetic biologists, etc.

Some of the applications of this discipline are: directed mutagenesis of enzymes with catalytic applications, the study of interactions between biomolecules or total synthesis focused on a diversity of molecules similar to natural bioactive products, in order to identify new types of biological activity and new bioactive molecules, etc.

The scientific community of the Barcelona Institute of Science and Technology consists of around 1,000 scientists, including group leaders, researchers and PhD students. The BIST centres have an overall budget of more than €117 million, consisting of core funding (less than 40%), competitive funds (mostly from Europe or Spanish governmental bodies) and private funds.

Grants from the European Research Council (ERC) are one of the principal indicators of international scientific excellence. BIST, with 0.81% of researchers in the country, receives 15% of grants awarded (by the state), 29% of those obtained from Catalonia and 1.1% of total European funds.

Regarding the number of publications in Nature Index, the international benchmark database, 27% of the articles originating from Catalonia and 9% of the total from Spain as a whole were signed by BIST. Despite being a new institute, in absolute terms (and weighted for impact) BIST occupies second place, preceded only by CSIC (in the country). Using the same criterion and excluding universities, it holds ninth place among European research institutes.

BIST’s research excellence is clear from the percentage of publications in journals in the first quartile of Nature Index (Q1), which stands at more than 90% (the total number of publications exceeds one thousand). This statistic is of particular importance as a quality indicator. We can compare this with the Massachusetts Institute of Technology (MIT) (67.1% of publications in Q1), the Max Planck Society (74.2%) and the Weizmann Institute of Science (80.5%).

If we compare the competitiveness of the main researchers (group leaders) of BIST to that of other international research centres, more than 40% of those at the Barcelona Institute of Science and Technology have received ERC grants, a very significant figure if we look at long-standing international institutions such as the Weizmann Institute of Science, where the percentage is 44%.

BIST has promoted the creation of 18 spin-off companies.

Helping to strengthen the role of science in society

Another of BIST’s founding missions is to help increase scientific knowledge in our country. In collaboration with members of its board of trustees and other bodies, BIST aims to develop an agenda that includes training the trainers, science campuses for young people and a series of activities to help make science and scientific methods a key part of learning.

The Barcelona Institute of Science and Technology (BIST) Communication

BIST was created in spring 2015 by six research centres that already had a track record of working together: the Centre for Genomic Regulation(CRG), the Institute of Photonic Sciences (ICFO), the Institute of Chemical Research of Catalonia (ICIQ), the Catalan Institute of Nanoscience and Nanotechnology (ICN2), the Institute for High Energy Physics (IFAE) and the Institute for Research in Biomedicine (IRB Barcelona). BIST’s objective is to promote cutting-edge research and interdisciplinary training of excellence and to position itself among the main European scientific institutes.

BIST has the support of five large foundations, which are members of the board of trustees: La Caixa Banking Foundation, the Banc Sabadell Foundation, the Catalunya-La Pedrera Foundation, the Cellex Private Foundation and the FemCat Businesspersons Foundation. The Generalitat and seven academics serving in an individual capacity are also on the board.