Researchers at IRB Barcelona unravel a role for tumour suppressor genes in restricting the growth of neighbouring cell populations.

The study, published yesterday in PLoS Biology, might have implications for understanding the early events of tumorigenesis and the selection of the tumour-initiating cells.

The healthy development of an organism depends on its tissues and organs growing to the right size, stopping when they need to, and maintaining stability in their form and function. Correct development depends on the availability of nutrients to the cells in their environment, a process that is tightly controlled by signalling mechanisms that occur within and between the cells that form these structures. Disruptions in this signalling can lead to unbalanced growth within a tissue or organ, and can give rise to conditions such as cancer.

The TOR and PI3K signalling pathways regulate tissue growth according to nutrient availability, and are frequently over-activated in human cancer. In the study published yesterday in PLoS Biology, Institute for Research in Biomedicine (IRB Barcelona) PhD student Ana Ferreira and Group Leader and ICREA Research Professor Marco Milán report that the over-activation of these two pathways not only causes the excess growth of cells and tissues, but also restrict the growth of neighbouring cell populations.

They present evidence that the proteoglycan Dally, a protein that is known to modulate the spreading, stability and activity of the growth-promoting signalling molecule called Dpp (in flies) or TGF-β (in humans), is regulated by these two pathways and mediates the effects on neighbouring populations. “They do so by competing for Dpp”, says Ana Ferreira, first author of the paper and funded by a PhD fellowship from Portugal's Fundação para a Ciência e a Tecnologia.

"PTEN, a gene that negatively regulates the PI3K pathway, is one of the most commonly lost tumour suppressors in human cancer. Understanding whether this pathway also affects TGF-β spreading in mammals may help us to gain insight into the early events of tumorigenesis and the selection of the tumour-initiating cells," she confirms.

"Tumour initiating cells might be selected by their ability to compete for limiting growth factors and their capacity to restrict the growth of neighbouring cell populations," says Marco Milán, head of the Development and Growth Control Laboratory at IRB Barcelona. "Seventy percent of men with prostate cancer are estimated to have lost a copy of the PTEN gene at the time of diagnosis. It will be interesting to determine whether this mechanism, identified in fruit flies, is also active in humans." 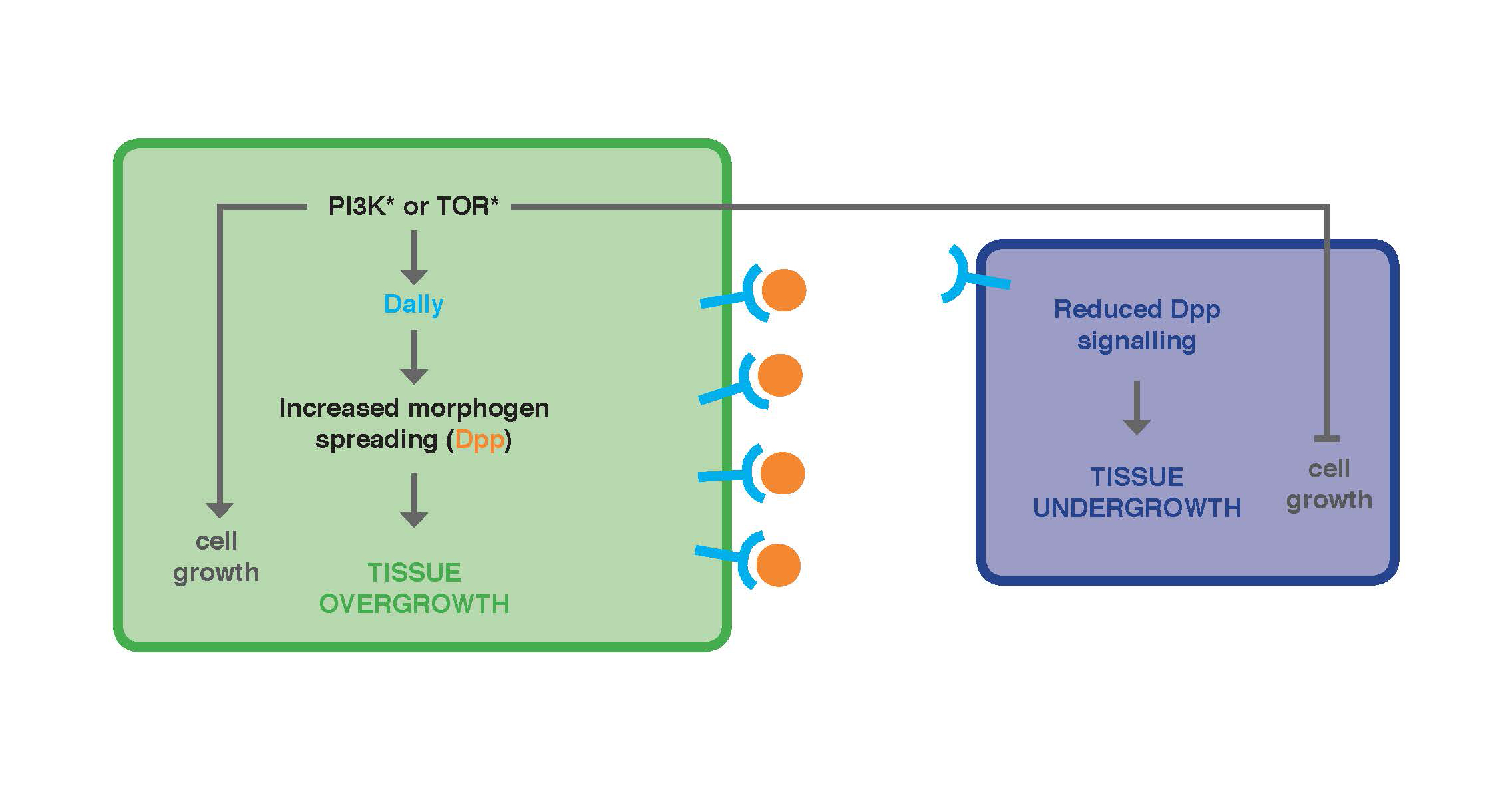 Dally proteoglycan mediates the autonomous and non-autonomous effects on tissue growth caused by activation of the PI3K and TOR pathways.

Published in the journal Nature Cancer, the study analyses how genetic alterations in tumour cells prevent the correct degradation of the proteins involved in tumour development and growth, thereby leading to abnormal cell behaviour.

A machine-learning model has allowed the scientists to obtain the most extensive annotation of the ubiquitin-mediated protein degradation system.

The analysis proposes a potential new clinical approach for cancer through the inhibition of oncoproteins with impaired degradation systems.

Understanding the effects of chemotherapy

The newspaper La Tribuna de Albacete has interviewed IRB Barcelona researcher Erika López Arribillaga about a grant awarded to her on 24 September by the Spanish Association Against Cancer (AECC). López Arribillaga’s project aims to unravel the long-term effects of some chemotherapy treatments on colorectal cancer patients.

The DNA damage caused by “chemo”

The newspapers El Mundo, La Vanguardia and Diari Ara, the TV station TV3 and the radio stationsCatalunya Ràdio andRAC1, among other media, have echoed on a study by the Biomedical Genommics lab, headed by Núria López, published in Nature Genetics. The study has for the first time determined the genetic mutations caused by various therapies used to treat cancer.