Chiral molecules are those that are not superimposable on their mirror image. Consequently, there can be two distinct isomers of these molecules, called enantiomers. Many of the compounds associated with living organisms are chiral, for example proteins, enzymes, DNA, hormones, etc. Therefore, enantiomers of compounds usually have different biological activity. Since a drug must match the receptor in the cell, it is often only one of the enantiomers that is of interest. In certain cases the other enantiomer may be harmful. Asymmetric synthesis is a chemical methodology that produces only enantiomer of the chiral compound with high selectivity using chiral reagents or catalysts. In a catalytic asymmetric reaction, a chiral catalyst is used to produce large quantities of an optically active compound from an achiral precursor. The research of the group is devoted to the asymmetric synthesis of biologically active molecules. Industrial companies are concerned about disposing of unwanted compounds and also about the inefficiency and costs involved in the chemical processes. Therefore there is a strong demand for asymmetric syntheses methods.

Our research centre on the synthesis of biologically active compounds with the aim to develop methodologies that are: a) enantioselectives, leading to one enantiomer with high optical purity, b) based on catalytic asymmetric reactions, and c) stereodivergent, with key intermediates that could be converted into multiple compounds or isomers.

1.- Enantioselective Synthesis of Amino acids and Amino alcohols
Amino alcohol fragments are present in many natural compounds such as aza-sugars, amino sugars, amino acids or sphingosines. We focus on the enantioselective synthesis of these families of compounds by developing convergent approaches on the basis of the regioselective opening of epoxides or sulphates prepared by Sharpless asymmetric epoxidation or dihydroxylations. As part of out methodology, we also use unsaturated epoxides and ring-closing metathesis (RCM) reactions for the preparation of cyclic compounds. 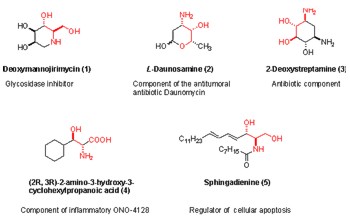 2.- The Pauson-Khand Reaction
The Pauson-Khand reaction (PKR) is a cycloaddition, promoted or catalysed by cobalt, between an alkene and an alkyne with insertion of a carbon monoxide molecule to give a cyclopentenone. In recent years, the group has developed efficient methods of asymmetric PKR using chiral (P,S)-bidentate ligands. The challenge is to perform the reaction with catalytic amounts of both the ligand and the metal. We are currently designing new ligands for a catalytic version of the asymmetric intermolecular PKR. 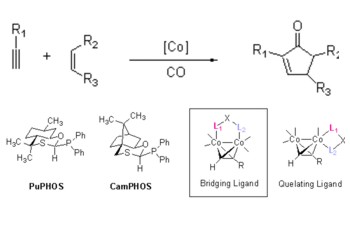 3.- Synthesis of five-membered-ring compounds
Prostaglandins have a wide variety of functions and biological activities. Several recently developed drugs are synthetic analogues of prostaglandins. Phytoprostanes are not as widely known, but recent years, have witnessed considerable increase interest fin their biologic activity. All these compounds share a common feature, namely a cyclopentenone or a hydroxycyclopentenone ring. These structural characteristics make them suitable substrates to be synthesized by a PKR. In collaboration with Prof. P. Evans (Trinity College, Dublin), we have transformed the Pauson-Khand adduct of trimethylsilylethyne and norbornadiene into several dehydroisoprostanes (dPPJ1). We are currently working on the transformation of Pauson-Khand adducts into prostaglandines and phytoprostanes.

4.- Synthesis of specific inhibitors of beta-catenin
The progressive accumulation of nuclear beta-catenin, which deregulates cellular proliferation, differentiation, and migration, is an initial event in the development of colonic tumorigenes. In addition to its structural role in epithelial junctions, beta-catenin activates TCF-4-mediated transcription of genes required for cell proliferation. Our hypothesis is that tumor progression can be aborted by blocking the aberrant transcription mediated by beta-catenin. Our main goal is to identify small molecules that specifically block the beta-catenin mediated transcription, which essential for tumor development. Consequently, these molecules may be of potential therapeutic use in the treatment of colon tumours.

5.- Asymmetric Catalysis
Organocatalysis is the acceleration of a chemical reaction through a sub-stoichiometric amount of an organic molecule that does not contain metal. In this field, the most important catalysts are imidazolidinones and proline itself. Our project focuses on the preparation of new scaffolds and catalysts that can be used in organocatalytic reactions. In this regard, our research effort centers on the preparation of proline analogues for amine catalysis and chiral ketones specifically designed for dioxirane oxidation reactions. 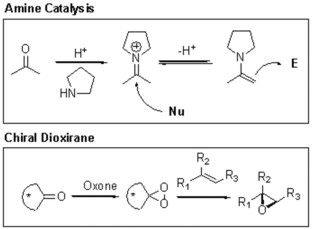