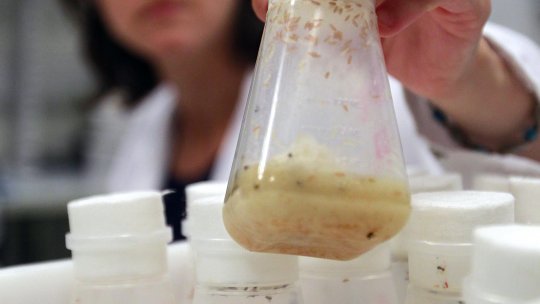 Scientists at IRB Barcelona publish the details of an old tissue transplant method for Drosophila melanogaster.

This technique allows the study of tumour growth and tissue regeneration

A study conducted by ICREA researcher Cayetano González, at the Institute for Research in Biomedicine (IRB Barcelona), and published in Nature Protocols describes a forgotten technique used in the fly Drosophila melanogaster dating back 80 years. This method allows the transplantation of tissue from larvae to adult flies, thus allowing research into tumour growth and other biological processes of biomedical interest, such as tissue regeneration.

In 2002, Cayetano González, head of the Cell Division lab at IRB Barcelona, faced a major technical problem with respect to research into tumour growth in Drosophila, namely the limitless growth of malignant tumours, which kill the fly. The solution seemed straightforward—tumour transplants, a common technique used in cancer research in mammals, including humans, which involves the transplantation of the tumour mass to mice. With over a century of research into the fly, it was hoped that the many tools available for this model would include one for tissue transplants. “And this was indeed the case, but the articles devoted to methodologies were few and incomplete and therefore reproducing the technique in the lab was very complicated,” explains Professor González.

Developed in 1935, the technique was used extensively in the following decades and then fell into disuse and practically disappeared towards the end of the last century. “In 2002, only a small number of researchers worldwide were aware of the existence of the technique,” he says. Professor János Szabad, from the University of Szeged, in Hungary, was one of the few who continued to use the method and he invited González to visit his lab to learn about it. Since then, González has used this approach in his research into cancer models in flies, and his lab has trained scientists from centres in Europe, the US, India and Australia about its implementation.

The technique consists of dissecting a tissue of interest and loading it into a fine, purpose-built glass needle for later injection into an adult fly. “It is in fact simple. But there are many small details, from the building of the needle to the care of the implanted flies, that seem easy when learnt from an expert but in practice are very difficult to reproduce without previous training,” state Professor González.

The article, written by Fabrizio Rossi, postdoctoral fellow at IRB Barcelona, and Cayetano González, describes the materials, equipment, and methods required to implement the procedure rapidly and efficiently and provides links to videos that show each step of the process. “Now any Drosophila lab anywhere in the world can use this powerful method,” says González.