Histones and their modifications are crucial for adaptation to cell stress 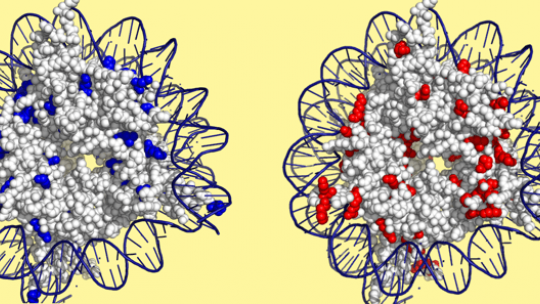 Histone residues required for an adaptive response to an increase in temperature (blue) or salt concentration (red). IRB Barcelona.

More than 200 regions (amino acids) in histones are identified as responsible for regulating the response to cell stress.

The study reports that histones undergo distinct modifications depending on the type of cell stress.

The work by the Cell Signaling laboratory has been published in the journal Nucleic Acids Research.

The genetic material—DNA— of plants and animals (within the latter humans) is stored inside the cell, and DNA packing is guaranteed by proteins called histones. Furthermore, histones play a key role in regulating the activation of gene expression and its timing: a given stimulus modifies a histone, making it allow or repress the expression of a gene. The Cell Signaling laboratory at IRB Barcelona, ​​led by Eulàlia de Nadal and Francesc Posas, has identified more than 200 regions (amino acids) in histones that, under cellular stress, undergo modifications to regulate the response to this condition.

Also, they have observed that stress of distinct nature, such as that caused by excess heat or salinity, leads to different histone modifications, thereby pointing to a "personalized" adaptation response to each type of stress. The study has been carried out on the yeast Saccharomyces cerevisiae, a model organism widely used in biomedicine.

"The histone modifications that regulate gene expression under normal conditions are being widely studied," says Eulàlia de Nadal. "However, little was known about the role of histones in responses to cellular stress, which have to be rapid and highly dynamic. Information about this role is important because the regulation of histones is associated with a wide range of diseases," she concludes.

Details about the modifications: heat and salt stress

On the basis of these results, the laboratory is to develop two lines of research. On the one hand, the researchers will address other specific modifications that occur in response to stress. And, on the other hand, to understand which mechanisms are relevant in different diseases, they will study how these modifications correlate with those that take place in human cells.