Dr. Eduard Batlle, distinguished with the Rei Jaume I Award 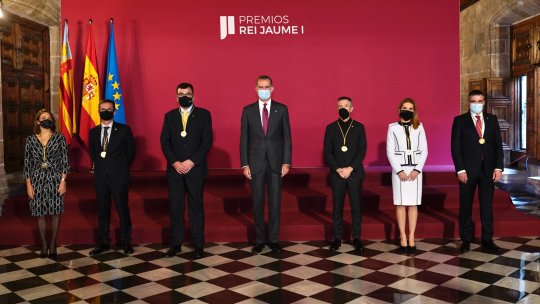 Last Friday (19 November), the Palau de Les Arts in Valencia hosted the presentation of the Rei Jaume I Awards.

Dr. Eduard Batlle, head of the Colorectal Cancer Laboratory at IRB Barcelona, ​​ICREA researcher and group leader of CIBER Cancer (CIBERONC), received the Rei Jaume I Award for Medical Research from government authorities and the Spanish Royal Family, in acknowledgment of his pioneering research on the immunology of colorectal cancer.

In the words of Dr. Batlle, "The final objective of the research in our laboratory at IRB Barcelona is to obtain information that allows the design of new therapeutic and diagnostic tools that can benefit patients."

The laboratory led by Dr. Batlle studies cancer from two angles: the evolution of cancer stem cells and their interaction with the environment during the progression of the disease. Specifically, it seeks to reveal how these aspects facilitate the development of metastasis.

His group recently discovered a mechanism involved in the exclusion of the immune system from the core of tumours, a situation that is responsible for the poor response to treatments that aim to enhance the eradication of tumours through patients’ immune systems. Blocking this mechanism can dramatically increase the success rate of these therapies in many types of cancer.

The Rei Jaume I Awards were created in 1989 to bring science and companies closer together for the promotion of research, scientific development and entrepreneurship in Spain.

These awards are granted to people whose work is highly significant and has been developed for the most part in Spain. The awards are presented annually and each honoree receives a gold medal, a diploma, and €100,000. Upon receiving this sum, the honoree commits to reinvesting part of it in research and entrepreneurship in Spain.