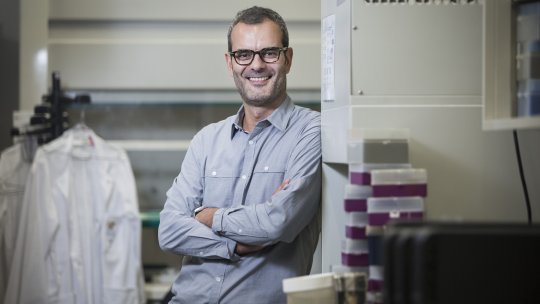 The ICREA researcher at IRB Barcelona has been recognised in the preclinical biomedical research category for his work on the link between ageing, stem cells, cancer, diet and circadian rhythm.

Today the Lilly Foundation has announced that the 2022 Biomedical Research Awards have been given to Dr. Salvador Aznar-Benitah and Dr. Josep Tabernero, in the categories of Preclinical and Clinical Research, respectively. In their 20th year, these awards, among the most prestigious in biomedicine in Spain, acknowledge two scientists who have made significant contributions to the development of biomedicine and health sciences in Spain and who maintain a recognised level of scientific activity.

"The brilliant careers of the two winners are examples of dedication and success in basic and clinical research. Their findings, which have an international impact, have contributed to increasing the prestige of the health sciences in Spain," explains Dr. José Antonio Sacristán, director of the Lilly Foundation, who adds that the award ceremony will be held in Madrid on 20 June.

In the Preclinical Biomedical Research category, the jury has recognised Dr. Aznar-Benitah, head of the Stem Cells and Cancer laboratory at IRB Barcelona and ICREA Research Professor, for his contributions to the study of the link between ageing, stem cells, cancer, diet and the circadian rhythm. Among their findings, Dr. Aznar-Benitah´s group has described that stem cell behaviour is tightly regulated by an internal clock that is aligned with the circadian rhythm, revealed some epigenetic mechanisms that allow stem cells to adapt their chromatin to different stimuli received throughout their lives, and identified the cells responsible for initiating metastasis in various types of human tumours.

Internationally acknowledged for his key contributions, Dr. Aznar-Benitah is one of the most dynamic researchers in these fields of study, with more than 70 articles published in peer-reviewed journals and a high impactor factor. Among them, special mention is given to his recent publication in Nature (2021), in which his team determines the influence of different dietary fats on the development of metastasis. The jury has appreciated the implications of all his findings not only for basic and clinical research but also for society at large. Similarly, the jury has highlighted his high scientific calibre and future projection and the potential of his research lines to become real-life solutions.

The Lilly Foundation´s 2022 Clinical Biomedical Research Award has been given to Dr. Josep Tabernero, Director of the Vall d'Hebron Institute of Oncology (VHIO), head of the Medical Oncology Service at the Vall dʼHebron University Hospital, and full professor of the Faculty of Medicine at the Universitat de Vic - Universitat Central de Catalunya, for the discovery of new mechanism involved in tumour development,  and the design of more efficient targeted treatments for cancer, especially gastrointestinal tumours.

Distinguishing 40 researchers since their launch in 2022, these awards have become a benchmark for outstanding careers within the scientific community. The rigour of the jury, chaired by Dr. Mariano Barbacid, appraises the merits of the candidates based solely on scientific criteria.