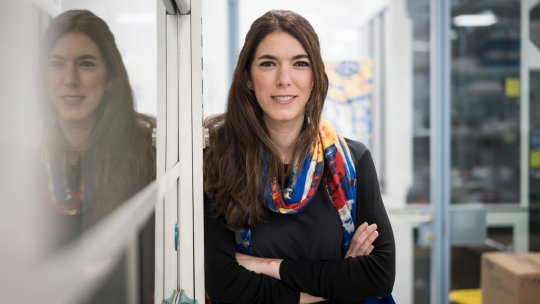 With the addition of this laboratory, which is the third to be set up in the last 12 months, the Institute now has 27 in operation.

The scientist Dr. Direna Alonso-Curbelo (1984, Gran Canaria), who has a promising career in cancer research, has joined IRB Barcelona to head the Inflammation, Tissue Plasticity & Cancer laboratory. This new research group will study the interaction between genetic mutations and inflammation to decipher how they alter the normal identity of cells and their environment to foster cancer, and aims to identify novel targets for its earlier detection and treatment. The group will focus its research efforts on pancreatic and liver cancers, among others.

Inflammation is a common phenomenon: when our tissues are damaged (due to a wound, or the presence of a toxin for example), cells from the immune system flood into the site to repair the lesion and remove damaged cells. However, if the inflammation occurs in tissues harbouring cells with oncogenic potential or is maintained over time, it can facilitate tumour growth and spread.

“Inflammation can be good or bad, and understanding the differences between these two types can point us towards new therapeutic strategies that may change the treatment paradigm of inflammation-driven cancers,” Dr. Alonso-Curbelo explains. “Cancer is often referred to as a wound that never heals, so understanding how precancerous and cancerous cells hijack physiological inflammatory responses is key for the identification of early disease biomarkers and drivers, and strategies to reactivate the immune system to fight it.”

The laboratory, which was set up with support from ”La Caixa”  Foundation and FERO-ASEICA, will also focus on the initial stages of cancer. “Understanding how normal cells turn cancerous and the initial stages of this process is crucial for its early detection and interception,” says Dr. Alonso-Curbelo.

Experimental animal models and the latest technology to tackle cancer

To achieve its goals, the laboratory will combine animal models enabling the study of interactions between the tumour and its environment, “single-cell” profiling analyses (in which cells are analysed individually) to map tumour ecosystems and their evolution, CRISPR/RNAi technologies, and organoid and cell cultures. This integrative approach aims to pave the way for the discovery of new molecular and cellular anti-cancer targets.

Dr. Alonso-Curbelo is recruiting a multidisciplinary team in which PhD students, postdoctoral researchers, and investigators with clinical and computational backgrounds will join efforts to tackle the cancer problem from different perspectives.

On September 25, Dr. Alonso-Curbelo received th 2nde FERO-ASEICA Award. The grant will cover € 80,000 for the cancer research project that will carried out at IRB Barcelona. The FERO-ASEICA Cancer Research Grant aims to promote young scientific talents and open new strategies to improve cancer outcomes. The winner of the 1st FERO-ASEICA Grant was Dr. Cristina Mayor-Ruiz, who is also a researcher at IRB Barcelona.

In September this year, Dr. Alonso-Curbelo received the prestigious 2021 Blavatnik Regional Award for young scientists in the “Life Sciences” category. With a distinguished jury of outstanding scientists and engineers from the state of New York, the Blavatnik Awards recognise scientists in three categories—life sciences, physical sciences, and engineering and chemistry—for their potential for bringing about transformational change in their respective fields of study.

“I am honoured to receive this prestigious recognition from the Blavatnik Family Foundation”, said Dr. Alonso-Curbelo. “I hope this award inspires other postdocs and students to persevere in our progress to change the paradigm of cancer treatment.”

Dr. Alonso-Curbelo studied Pharmacy at the Universidad Complutense de Madrid and did her PhD studies, focused on melanoma, in Dr. Marisol Soengas' laboratory at the Spanish National Cancer Research Centre (Centro Nacional de Investigaciones Oncológicas, CNIO). During her doctoral studies, she did two short-stays, one at the Netherlands Cancer Institute (NKI, in Amsterdam, The Netherlands) and the other at Memorial Sloan Kettering Cancer Center (MSKCC, in New York, US), in the laboratories of Drs. Reuven Agami and Johanna Joyce, respectively.

From the end of 2013 until autumn 2021, she worked as a postdoctoral researcher in Dr. Scott W. Lowe's laboratory at MSKCC, where she developed innovative experimental models to study the link between the tumour and its microenvironment, with the goal of identifying mechanisms that promote tumour development and block immune surveillance. During her predoc and postdoc training, Dr. Alonso-Curbelo has published 19 scientific articles. Her latest study, published in February 2021 in the journal Nature, defined how genetic mutations and tissue damage cooperate to initiate pancreatic cancer, and uncovered a large number of alterations in the way cells package their DNA (epigenetic alterations) that are acquired early on during tumour development and distinguish this process from physiological wound healing responses.

So far this year, the Institute has appointed three junior group leaders, reflecting its firm commitment to young talent. In this regard, Dr. Alonso-Curbelo is accompanied by newcomers Dr. Cristina Mayor-Ruiz and Dr. Alejo Rodríguez-Fraticelli, also young talented scientists who have recently set up their own groups. The appointment of these three researchers is part of the Institute's commitment to support talent with a projected career path of excellence and offer leadership opportunities to young researchers.