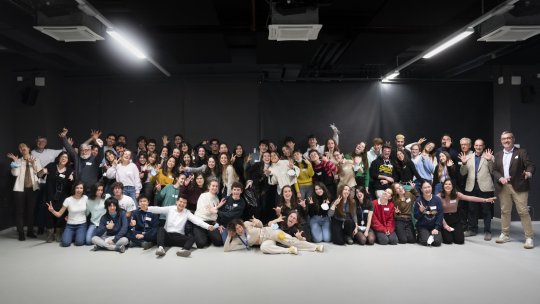 The brainchild of IRB Barcelona has given rise to the Crazy for Science initiative, which offers 13 categories, ranging from medicine and mathematics to economics and nutrition.
Held on the afternoon of 1 April, the commemorative event was attended by participants and tutors from all the editions and representatives from IRB Barcelona and the Catalunya La Pedrera Foundation.

The promotion of scientific vocations has been a priority for IRB Barcelona since it was founded, the Crazy About Biomedicine being its flagship in this regard. This initiative gives baccalaureate students the opportunity to participate in a series of workshops and hands-on sessions in which PhD students at IRB Barcelona lead the laboratory activities, as well as teach participants about research and the most advanced scientific techniques used.

An event was held on 1 April at the Barcelona Science Park to mark the 10th anniversary of the Crazy About Biomedicine Programme, which was launched in 2013 by IRB Barcelona, together with the Catalunya La Pedrera Foundation. The gathering was attended by participants of the 10 editions of the programme, researchers at IRB Barcelona who served as tutors, representatives of the two promoters of the initiative, namely Dr. Francesc Posas, Director of IRB Barcelona, Lluís Farrés, Director of Knowledge, Education and Research at the Catalunya La Pedrera Foundation, and Dr. Joan Guinovart, former Director of IRB Barcelona and promoter of the programme.

Dr. Francesc Posas welcomed the participants to the event on 1 April and thanked the Catalunya La Pedrera Foundation for its support of the Crazy About Biomedicine Programme over the last 10 years. Upon ending his speech, he admitted that as a young man he too was mad about science. Then spoke Dr. Guinovart, Sr. Farrés and Mar Filat, participant in the 4th edition of the program, who explained how she remembers Saturday mornings with great enthusiasm: "because we were going to learn, meet people with shared interests and enjoy."

Based on the success of Crazy About Biomedicine, the Catalunya La Pedrera Foundation promoted the launch of 13 equivalent programmes under the umbrella Crazy About Science. Following a similar methodology and revolving around different scientific disciplines, these 13 programmes are carried out in various research centres around Catalonia.

“This pioneering programme is aimed at youngsters in their first year of baccalaureate who are passionate about science and biomedical research, and it aims to share the cutting-edge science undertaken at our institute and foster scientific vocations among the youngest members of society,” said Dr. Muriel Arimon, Public Engagement and Science Education Officer at IRB Barcelona.

More than 240 youngsters have passed through the programme over these 10 years. Of these, about 95% have ended up studying a science degree and of those who have already finished their degrees, 23% are pursuing a Master´s degree or PhD.

A strategic commitment by IRB Barcelona

IRB Barcelona is a research centre that is recognised for its commitment to bringing science closer to the general public, in particular young people. In addition to the Crazy About Biomedicine Programme, the Institute has a wide range of activities with the same objective, such as Open Days, training courses for teachers, educational material, artistic residencies, etc.

At a time when science and the practise of the same are increasingly important in all sectors of the economy and society, IRB Barcelona´s public engagement activities help to promote scientific literacy, foster critical thinking, and open up science to different audiences in different settings.

Since 2013, 242 talented, creative, young people with initiative and above all passion for science from all over Catalonia have participated in the Crazy About Biomedicine Programme. Those who have already completed their degrees have gone on to develop a range of careers: some are currently pursuing their careers abroad and although some have returned to do research in centres like IRB Barcelona, others are working in leading companies in the sector.

Some examples of outstanding career paths:

Do not miss the official photographs of the event marking the 10th anniversary of the Crazy About Biomedicine Programme.

More information about the Crazy About Biomedicine Programme.