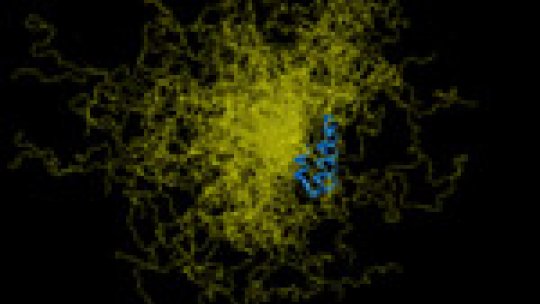 Representation of an IDP with a structured region (blue) and a non-structured one(yellow).

This refers to Intrinsically Disordered Proteins, which were discovered ten years ago thanks to the sequencing of the genome.

Many of these proteins are involved in key cellular processes and in pathologies of great impact such as cancer and neurodegeneration.

In the next Barcelona Biomed Conference, IRB Barcelona and the BBVA Foundation bring together 150 world authorities in this field, which is called upon to revolutionalize biomedicine.

In biology there is an established principle that is starting to waver because it is incomplete. This has to do with the belief that proteins, –the workers of cell-, necessarily adopt a certain form to carry out their functions. For the last ten years, structural biologists, biophysicists and bioinformaticians have been analysing the so-called Intrinsically Disordered Proteins (IDPs), the main feature of which is that, in spite of not adopting a well defined fold, they exert key functions in cells. “About a third of the proteins in our bodies are IDPs, about which little is known while another third corresponds to structured proteins, which we can obtain structural information about. IDPs are of biomedical relevance because we now know that 80% of the proteins involved in cancer belong to this category”, explains Miquel Pons, head of a research group at the Institute for Research in Biomedicine (IRB Barcelona) and an expert on structural biology. Together with IRB Barcelona researcher Pau Bernadó, and Peter Wright, from the Scripps Research Institute of the U.S., Miquel Pons is co-organising the Barcelona Biomed Conference to be held from 4 to 6 October at the Institut d’Estudis Catalans. “Intrinsically Disordered Proteins in Biomedicine” is the first of three Barcelona Biomed Conferences organised by IRB Barcelona and the BBVA Foundation in 2010.

The sequencing of the human genome, the development of proteomics -which studies proteins and their interrelations- and bioinformatics, have allowed scientists to discover IDPs and it is now known that these molecules exert their regulatory role over other proteins inside the cell. “With classical techniques, such as crystallography, we were not able to observe IDPs, because of their lack of structure and so they were invisible to our eyes”, explains Pons. He goes on to say that “to advance in their study we must undergo a conceptual and technological revolution”. Several tools to study the structure of these proteins are already available, such as Nuclear Magnetic Resonance and Small-angle X-ray Scattering (SAXS); however, new techniques need to be explored or those currently available require improvement. “It is clear that although these proteins are difficult to observe, to photograph, it does not imply that they should be overlooked, because they are of great biological relevance”.

Pau Bernadó, an expert in the acquisition of structural information on proteins and their dynamics, makes an analogy between IDPs and Swiss army knives. “While most of the proteins that we know of are like screwdrivers, they have a determined conformation and often perform a sole function, IDPs are like Swiss army knives, they are multifunctional”. Because IDPs scarcely have any structure, they are highly flexible to interact with many other proteins in the body, thus they occupy key positions inside cells. “To advance in the design of specific drugs, it is crucial to understand IDP dynamics, identify the proteins with which these molecule react and discover the way in which they do this”, say the experts. The 20 speakers invited to Barcelona to present their work to around one hundred specialists work on IDPs involved in cancer, Alzheimer’s disease and other diseases and on the development of new techniques to study these proteins.

The Biomed Barcelona Conferences are extended to Madrid

IRB Barcelona and the BBVA Foundation have extended the Barcelona Biomed Conferences to Madrid, where one of the invited speakers will also give a presentation. While the conferences held in Barcelona are directed at specialized scientists, the presentations in Madrid seek to target a wider audience, such as physicians and researchers from other disciplines. On this occasion, Ron Kopito, from Stanford University, will present “Protein quality control in health disease” at the central offices of the BBVA Foundation in Madrid on Thursday 7 October. Kopito is one of the pioneers in the study of IDPs and their relation with neurodegenerative diseases such as Alzheimer’s and Huntington’s.

For more information about the conferences in Madrid, contact the BBVA Foundations’s press office: 91 3745210,
comunicación