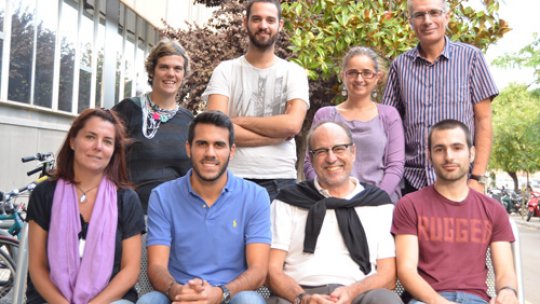 The team of scientists that will address the Friedreich's Ataxia project (Photo: Luca T. Barone)
Image 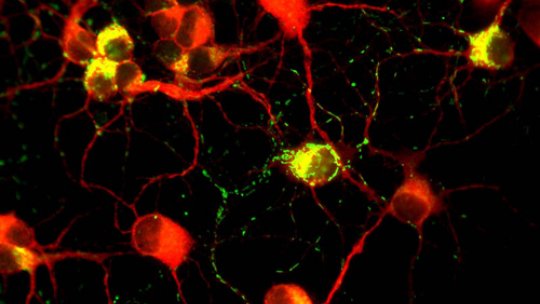 Mice neurons with the Frataxin gene transfered. In yellow, localization of the frataxin protein in neurons (Picture: Díaz-Nido lab)

Patients and their families united in a single platform, two patients’ associations, and two biomedical research centres join forces in the fight against this hereditary neurological disease for which there is still has no cure.

Scientists at the “Centro de Biología Molecular Severo Ochoa” in Madrid and IRB Barcelona develop a gene therapy project that involves introducing into the body’s cells a correct copy of the defective gene that causes the disease.

Friedreich’s Ataxia affects approximately 2 in every 100,000 people of European origin (Caucasians). In Spain the incidence of this disease is higher, with an estimated 4.7 cases per 100,000 population.

The Spanish Federation of Ataxia (FEDAES)—in representation of the GENEFA Platform for a Friedreich's Ataxia cure—, the Babel Family association for biomedical research into Friedreich’s Ataxia, the “Centro de Biología Molecular Severo Ochoa” (CMBSO), and the Institute for Research in Biomedicine (IRB Barcelona) have signed an agreement through which these patients’ associations will fund, by means of donations, a 3-year research project addressing Friedreich’s Ataxia.

Friedreich’s Ataxia is a rare degenerative disease of the nervous system that affects coordination, balance and movement. It is a monogenic disease, that is to say, it is caused by a defect in only one gene. Those affected by this disorder have inherited an altered frataxin gene from both parents. The project aims to develop molecular tools to transport a correct copy of the defective gene to all the cells of the body and particularly to a kind of neuron that undergoes degeneration and causes the disease. This approach seeks to restore the normal levels of frataxin and to stop the manifestation of the degenerative symptoms of the disease.

The GENEFA Platform heads the money-raising campaign to collect the 300,000 euros required to develop this gene therapy project. Juan Carlos Baiges, in representation of FEDAES/GENEFA and the Babel Family for this project, expresses his enthusiasm, “it is the first step towards achieving an effective treatment based on solid basic research knowledge”, and adds, “we have a motivating project ahead that may lead us closer to a treatment.”

Ernest Giralt, at IRB Barcelona, and Javier Díaz-Nido, at CBMSO, scientific co-leaders of the project, stress that, “it is uncommon for basic researchers to have direct contact with patients and this project is fantastic because it reminds us that the solutions to diseases derive from basic research, the cornerstone of future applications.”

The German physician Nicholas Friedreich described the disease for the first time around 1860. Friedreich’s Ataxia is a disease that affects the nervous system and for which there is no cure or specific treatments. Although Friedreich’s Ataxia is the most common kind of ataxia, it is a rare condition. It affects approximately 2 in every 100,000 people of European origin (Caucasians). In Spain and France the incidence of this disease is higher, with a prevalence of 4.7 cases per 100,000 population, suggesting that this disease probably originated in the geographic area of the Cantabrian mountain range.

Friedreich’s Ataxia normally appears before the ages of 5 and 25, causing progressive loss of balance, coordination and movement. About ten years after the onset of the first symptoms, those affected usually become wheelchair-bound. Life expectancy is severely reduced, above all when there are serious secondary complications, such as progressive cardiomyopathy.

In 1996, an international group of scientists identified the cause of Friedreich’s Ataxia as a defect in a gene that codes for the protein frataxin, located in chromosome 9. One of the most promising strategies to correct the low cellular levels of this protein is through gene therapy, by attempting to introduce a correct copy of the gene into cell nuclei.

“We have fully isolated the gene and packaged it in transport vectors or “vehicles” and we have tested its efficiency in patient cells in vitro. Now we have to improve transport to the cells of the nervous system and test the efficiency in mice with ataxia,” explains Javier Díaz-Nido, head of the group “Neuronal repair and molecular therapy in neurodegeneration. Spinocerebellar Ataxias” at the CBMSO, a centre comprising the “Universidad Autónoma de Madrid” and the CSIC, and that is also a member of the Centre for Biomedical Network Research on Rare Diseases (CIBERER).

The physician Díaz-Nido is a world authority on ataxias, having devoted more than ten years to studying Friedreich’s Ataxia at the molecular level and developing techniques to make gene therapy a reality. “The last ten years have witnessed great advances in gene therapy thanks to the contributions of hundreds of scientists worldwide. The last step is still pending for it to become a clinical option, but we are beginning to envisage that gene therapy will be possible for the treatment of such diseases of genetic origin,” maintains Díaz-Nido.

The brain is protected by the blood-brain barrier. This barrier serves to prevent toxic substances from entering the brain but it also obstructs the entry of therapeutic drugs. In this regard, collaboration with Ernest Giralt is critical. Prof. Giralt, head of the group “Design, synthesis and structure of peptides and proteins” and coordinator of the Chemistry and Molecular Pharmacology Programme at IRB Barcelona, has extensive experience and his expertise in peptide chemistry and drug delivery systems is internationally recognised. His laboratory has generated and satisfactorily tested a set of shuttle peptides able to cross the blood-brain barrier. “Our main goal is to adapt our shuttles to the vectors carrying the frataxin gene to enable them to cross the blood-brain barrier and then enter the nuclei of the cells of the nervous system,” explains Meritxell Teixidó, associate researcher at IRB Barcelona and responsible for this research line.

The joint research project begins in November 2013 and will last for three years. During this time, the team of scientists hopes to prepare the proof-of-concept that will allow the leap from basic lab research to preclinical trials in more sophisticated animal models and advancement towards a gene therapy for Friedreich’s Ataxia.