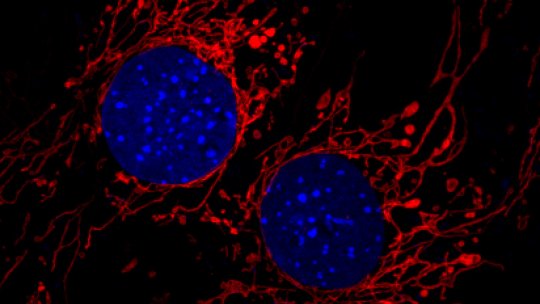 A team headed by Antonio Zorzano at IRB Barcelona has identified activators of the mitochondrial protein Mitofusin 2 for the treatment of type 2 diabetes.

The protein is a key regulator of many mitochondrial functions, as well as of the cell as a whole.

Scientists at the Institute for Research in Biomedicine (IRB Barcelona), the University of Barcelona, CIBER de Diabetes y Enfermedades Metabólicas Asociadas (CIBERDEM) and CIBER de Bioingeniería, Biomateriales y Nanomedicina (CIBER-BBN) have identified activators of the mitochondrial protein Mitofusin 2, a potential therapeutic target for the treatment of patients with type 2 diabetes.

Headed by Antonio Zorzano at IRB Barcelona and Fernando Albericio at the University of Barcelona, researchers have identified activators of the Mitofusin 2 for the treatment of type 2 diabetes. This protein is expressed at abnormally low levels in patients with diabetes. “By means of phenotypic screening studies and validation in human cells, we have unveiled that participation of Mitofusin 2 in the development of the many alterations associated with diabetes,” say the authors of the study.

Mitofusin 2 may play a key role in insulin response

The development of mitochondrial dysfunction is a relevant factor in insulin resistance. Previous studies by Antonio Zorzano’s group at IRB Barcelona showed mitochondrial dynamics where Mitofusin 2 play a pivotal role in the maintenance of cell capacity to respond to insulin.

The current study has focused on the search for molecules that activate Mitofusin 2, “a protein present in all mitochondria and that allows us to produce energy from nutrients in function of environmental conditions,” explains Antonio Zorzano. “This protein is a key regulator of many mitochondrial activities, as well as of the cell as a whole,” adds David Sebastián, member of the research team. In this regard, Mitofusin 2 deficiency leads to the development of insulin resistance, one of the initial defects that trigger the onset of type 2 diabetes.

The researchers conclude that preventing the decrease in Mitofusin 2 levels may provide a therapeutic strategy to halt the development of insulin resistance in susceptible individuals and in patients with diabetes.

Published recently in Cell Chemical Biology, the study has involved researchers from the University of Santiago de Compostela, University of Extremadura and University of Queensland (Australia), the latter university hosting the first author of the work, IRB Barcelona alumnus Laia Miret-Casals.

Although there is a considerable arsenal of oral antidiabetic drugs, they are sometimes not efficient and daily injections of insulin are needed. Likewise, there is an alarming rise in the prevalence of type 2 diabetes is associated with an increase in the number of diabetic patients with severe insulin resistance and in patients that develop the disease early (before 25 years of age). This context calls for the development of new treatments that prevent the progression of diabetes and that allow the application of personalised medicine.