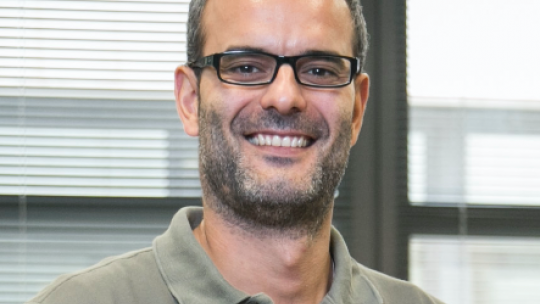 The Barcelona City Council acknowledges the relevance of his work for metastasis research.

The Barcelona City Council has announced the 2016 "Premi Ciutat de Barcelona" awardees, the highest recognition that the city gives to its citizens. Salvador Aznar Benitah, ICREA researcher at IRB Barcelona, has been recognized in the Life Sciences category.

The council acknowledges Salvador Aznar Benitah for his research, published in Nature, identifying metastasis-initiating cells through a specific marker, namely the protein CD36. Found in the membranes of tumour cells, this protein is responsible for taking up fatty acids. CD36 activity and dependence on lipid (fat) metabolism distinguish metastasis-initiating cells from other tumour cells.

The award ceremony, which will be presided over by the Mayor of Barcelona, Ada Colau, and the Deputy Mayor for Enterprise, Culture and Innovation, Jaume Collboni, will take place on February 16th in the Saló de Cent of the Barcelona City Council.

Awards for creativity, research and quality production made in Barcelona

Through this annual prize, the Barcelona City Council recognises high quality creativity, research and quality production by individuals, groups or organisations in Barcelona. The winners are chosen by a jury of renowned representatives from each sector, who evaluate all the projects in each field.

This is the second time an IRB Barcelona’s researcher has won this award. Ernest Giralt, Group Leader of the Peptides and Proteins Laboratory, received it in 2015.