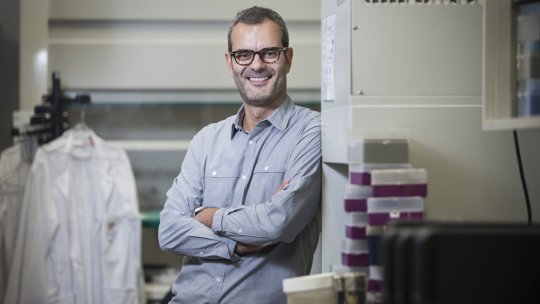 This prize is awarded to young European researchers developing innovative projects and recognised by the scientific community.

Salvador Aznar-Benitah, head of the Stem Cells and Cancer laboratory at IRB Barcelona, studies stem cells and how their dysfunction triggers processes such as ageing or metastasis.

On 30 November, the Bettencourt Schueller Foundation awarded the Liliane Bettencourt Prize for Life Sciences to Salvador Aznar-Benitah, ICREA researcher at IRB Barcelona. This prize is presented to European researchers under the age of 45 who are recognised by the scientific community and who are carrying out particularly promising projects. The prize is endowed with €300,000.

"It is an honour to receive this prize and I am very grateful to the Bettencourt Foundation. It will allow my lab to embark on ambitious projects devoted to dietary fat and its role in cancer and ageing," says Aznar-Benitah.

The support provided by the Foundation is given mainly to basic research activity that contributes to its top priority, namely the improvement of public health. It awards four scientific prizes to support researchers at pivotal stages of their careers. The funding that comes with these prizes serves to encourage the development of new approaches in emerging fields.

Cancer and ageing: dietary fat in the spotlight

Salvador Aznar-Benitah and his research group are interested in the mechanisms that regulate adult stem cells and why this population of cells become dysfunctional during ageing and cancer. In the field of cancer research, his team focuses on the behaviour of metastasis. They have also been able to establish a direct relationship between the consumption of certain fats, such as palmitic acid, and the development of metastasis, that is, the spread of cancer cells from the tumour of origin.

Other prizes awarded by the Bettencourt Schueller Foundation

This year the Bettencourt Schueller Foundation has awarded prizes to a total of 20 researchers in the distinct categories: 4 "Coup d'elan" prizes for researchers working in France, 1 prize within the ATIP-Avenir programme and 14  Bettencourt prizes to young postdoctoral researchers.